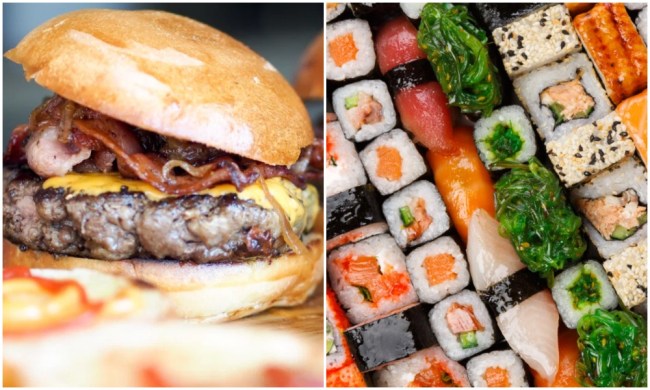 The Brilliantly Dumb Show just released Episode No. 69 where Big Game Bob took on the challenging task of ranking the world’s Top 5 foods of all time during the “Ask Bob” segment of the show. I know there Is no chance in hell I could please everyone on this and am subject to some strong debate here, but that’s the beauty of ranking food. Shall we?

Who doesn’t love food that can be versatile? You can grab a $1 burger at Mcdonalds or a $30 burger at your local steakhouse and both would taste great. That’s the beauty of the hamburger. Pro Tip: I think almost every single hamburger belongs on a brioche bun.

I love a cuisine where it is totally acceptable to order 5-10 different things on the menu. I always have had a lot of respect for the guy able to take on the task of ordering sushi for the table, never an easy thing to do. Nothing says “I got my shit together in life” quite like a guy who is able to handle and finesse a set of chopsticks. Sushi is awesome and brings the people together unlike any other food.

Have you ever had a bad piece of lobster? No, you haven’t. Whether you dip it in butter or not, lobster goes down the hatch unlike anything else out there. It’s like candy for adults, you’ve just got to work for it.

Another versatile food that you can have as a side, for lunch, as a starter, or even as an entree. We all praise LeBron James for being able to play and guard all positions on the floor, we need to do the same with caesar salad. Caesar salads can do it all. Any great night starts with a caesar.

Nothing screams the weekend for me quite like walking into my local bagel shop and asking for three plain, three everything, three sesame, and three poppy bagels. It’s a shame bagels with cream cheese do not get the credit they deserve. Want to throw some lox on there? Fine, nobody is going to judge, cucumbers, capers, whatever your heart desires. DO NOT sleep on the classic bagel with cream cheese to get the day started.

For more of the madness, be sure to subscribe to The Brilliantly Dumb Show on YouTube, Apple Podcasts and Spotify.