Elon Musk’s New Son’s Name Is So Bizarre Even Grimes, Who Gave Birth To The Kid, Messed Up Explaining It 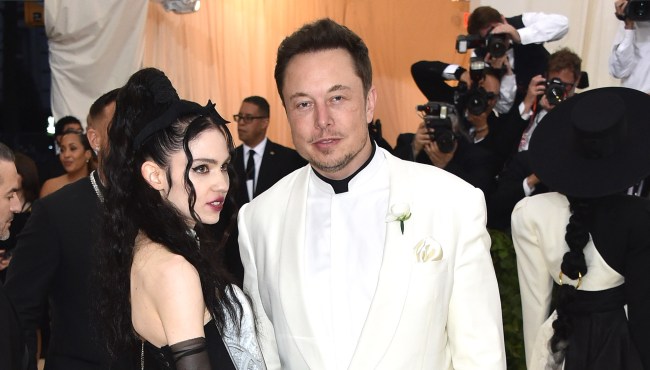 48-year-old billionaire Tesla and SpaceX founder Elon Musk appears to be losing some of his marbles. Maybe it’s a mid-life thing.

After announcing on Twitter that he was planning on “selling almost all physical possessions” and torpedoing the stock price of Tesla to the tune of $13 BILLION in value, he and his partner, 32-year-old singer Grimes, welcomed into the world their first child together – a baby boy named X Æ A-12.

If you know how to pronounce that then you’re ahead of, well, everyone on the internet who has given it a shot since Musk’s son was born.

Combining the best guesses put forth I am going with X Æ A-12 being pronounced Chi Ash Archangel Musk.

In the Greek alphabet, X is the symbol for the letter chi. Æ is pronounced “ash” in the Scandinavian alphabet. And the A-12 is for the Lockheed A-12, a CIA aircraft codenamed Archangel.

Am I right? No freaking clue. Because neither Musk nor Grimes have offered any real clarification.

In fact, the name is so bizarre not even the boy’s mom can properly explain it.

Tuesday night, Grimes did try to give it a shot, however, tweeting…

•X, the unknown variable
•Æ, my elven spelling of Ai (love &/or Artificial intelligence)
•A-12 = precursor to SR-17 (our favorite aircraft). No weapons, no defenses, just speed. Great in battle, but non-violent
+
(A=Archangel, my favorite song)

•X, the unknown variable ⚔️
•Æ, my elven spelling of Ai (love &/or Artificial intelligence)
•A-12 = precursor to SR-17 (our favorite aircraft). No weapons, no defenses, just speed. Great in battle, but non-violent 🤍
+
(A=Archangel, my favorite song)
(⚔️🐁 metal rat)

One problem, “their” favorite aircraft is actually the SR-71 which Musk was more than happy to take to Twitter to correct her because apparently he has a death wish.

Grimes fired back at him, tweeting, “I am recovering from surgery and barely alive so may my typos b forgiven but, damnit. That was meant to be profound.”

I am recovering from surgery and barely alive so may my typos b forgiven but, damnit. That was meant to be profound 🦔

“U r a powerful fairy princess,” Musk tweeted back, only using emojis instead of just saying it because he’s hip like that.

Despite Grimes’ explanation of her and Musk’s son’s unusual name, people were still very, very confused.

Thanks this didn’t help at all

"Æ" is in no way similar to "Ai," this is hilariously dumb.
[Æ], or the "ash" symbol, represents the near-open front unrounded vowel sound, what many people would call a "flat A" sound. Essentially, it's the <a> sound in the American pronunciation of the word "hat."

It has nothing in common, pronunciation or meaning wise, with the Chinese word "ai" or with the initialism A.I.

Leave it to these dipshits to misspell their own kids dumbass fake name.

I think it sounds like the name of the main character in the story 🪐 I hope he vibes with that.
Ok, going back into the pain/ beauty reverie for sum time, just came on to add my thoughts. Peace to all 🤍-🐉🐷🐁

how do we pronounce it???