Guy Crawls Under Tanker In His Underwear, Sucks Wine Straight From The Valve As It Speeds Down Highway, Gets Arrested 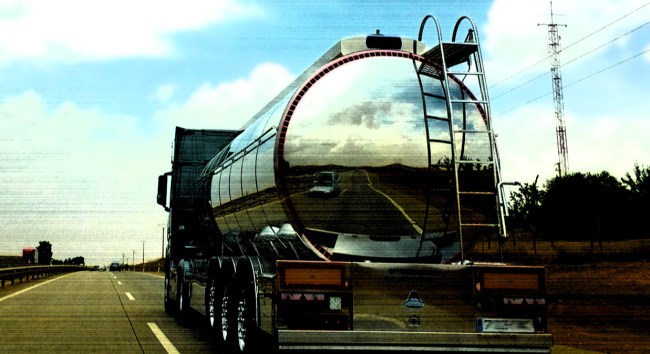 In one of the weirdest arrest stories we’ve seen in what has to be at least the past three days, a man was arrested for climbing underneath a semi and sucking down wine straight from the tanker valve while the truck was rolling down the highway.

He must have been really, really thirsty.

On Tuesday, in Turlock, California, a tanker truck driver was going northbound on Highway 99 when the man in question, Gabriel Moreno, pulled up alongside him gesturing that the truck driver needed to pull over.

Assuming that there was something mechanical wrong with his rig, the driver proceeded to pull on to the right shoulder of the highway.

That’s when things began to get weird.

“The gentleman (Moreno) gets out of his vehicle in his underwear only, and runs to the back of the trailer,” explained CHP Officer Thomas Olsen. “That’s when the driver realized, ‘This isn’t right,’ and re-enters the traffic lane. The gentleman jumps on the trailer, which has a ladder on the back, and gets a ride.”

As the driver made his way back down Highway 99 he noticed something else odd: the gauge on his dashboard shows that the truck is losing weight. Like, a LOT of weight. As in hundreds of gallons of red wine are disappearing. So he pulls over again to check and see what’s happening.

Turns out that not only did Moreno hop on to the ladder on the back of the truck, he managed to shimmy his way underneath the tanker – while it was rolling down the highway – unscrewed a valve underneath the truck and began trying to drink as much of the spilling red wine as he could.

Once the tanker came to a stop, Officer Olsen says Moreno was “lying on the ground and doing snow angels, basically, as the wine was pouring down on him.”

Moreno then attempted to flee, but when calls came in about a man “covered in blood” in the area he was eventually caught and arrested on charges of felony vandalism and misdemeanor driving on a suspended license.

According to the the trucking company, Moreno wasted about 1,000 gallons of red wine or the equivalent of around 5,000 bottles of the stuff.

Moreno spent the night in jail and was released on Wednesday. Also on Wednesday, Moreno got arrested again “within moments” for trying to steal a truck, according to the Stanislaus County Sheriff’s Department Facebook page.

Moreno said he committed his second crime in two days because he “was unhappy he didn’t get a sandwich as part of the standard meal at the PSC (Public Safety Center)” so he tried to get caught stealing the truck as “a way of getting a return visit to the jail, where he hoped to finally enjoy his sandwich.”

On Thursday, Moreno was released again, this time without stealing anything.