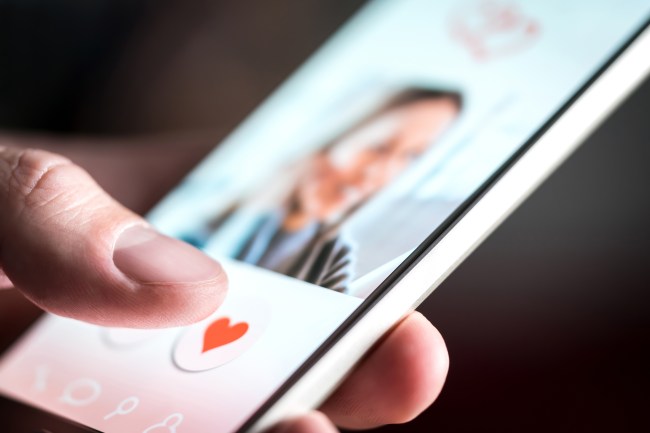 Going on Tinder when your wife is out of town would be a perfectly normal thing if you were in an open relationship of some sort. But in a committed relationship, it’s kind of a hard one to explain.

Going on Tinder for fun is easy enough to accept. Tinder exploded in popularity and became a $10 billion company because of how addictive it is to swipe and match with someone and have that instant sense of gratification. But it’s virtually impossible to explain why a married guy would go on Tinder ‘for fun’ while his wife is traveling for business and that explanation not look sketchy as fuuuuuuck.

This guy went online to ask for advice. His wife was traveling for work and 100 miles away. He says he downloaded Tinder for fun and started swiping until BOOM, he matched with HIS WIFE. I have a personal theory for what’s probably happening here but let’s first take a look at his situation (via Reddit):

I’ll start by saying that my wife and I don’t have any sort of open relationship agreement or anything of that nature.
We met on Tinder 3 years ago, fell in love fast, moved in together, and got married. We’ve been married over 14 months now, and quite happily, I would say.

A month ago she left on a business trip for a week and I found myself downloading Tinder on a particularly lonely night. I don’t even know why. I didn’t have any intentions. But I did it.

I swiped here and there and got pretty bored with it. It was a funny reminder of that time of my life. I deleted it and moved on.

On Monday my wife left for another business trip. Last night I once again downloaded Tinder and started swiping. Again, I had a laugh, but ultimately was bored of it.

Then I saw her picture come up.

Abort the mission, dude. At the very least, call or text her immediately to explain yourself instead of letting time pass. With each passing second, you look more and more sketchy. If you came forward IMMEDIATELY and said you were bored and curious you might’ve been able to properly explain yourself but now you look like you have something to hide.

I say shocked for a moment. I wondered if I should just delete it and pretend nothing happened. I thought maybe a bot stole her picture…. But I read her profile… it’s her. It’s her now and it’s her live. There’s even a picture of her where I am cut out.

I decided to make a bold move and swipe right.
I swiped and we matched.

She gets back from her business trip tomorrow. I’m going to confront her then. I don’t even know how this is happening. She’s over 100 miles. Is a friend of her using her account??
Now I have to explain why I was on Tinder. This is just a huge can of worms that got opened.
What the hell do I do?

TL;DR – I matched with my current wife on Tinder

So as I mentioned above, my theory is that he’s getting catfished here (in a sense). I think there’s a chance that someone’s probably hijacked pictures of his wife from Facebook or wherever and is using them in a fake profile.

The MOST OBVIOUS explanation is she’s actually not 100-miles away on a business trip but somewhere in town and using Tinder to cheat on him. But I don’t really buy the idea that she’d just pretend to be out of town to go stay at a hotel or friend’s house and use Tinder to meet someone, that seems too lazy. If she was the cheater then she’d probably have planned this out better.

One commenter on the Reddit thread (/u/romansamurai) put forth three possibilities:

1. It’s a catfish.
2. She has been using tinder also to “have a laugh”….like OP here. (But if she’s using it when on trips why put location of home area?)
3. She or someone else saw OP on tinder and she decided to see if it was him herself. And so SHE caught HIM on tinder!”

It seems a little silly to spend a lot of time thinking of the thousand different scenarios that could play out here when the most obvious one is that she uses Tinder to cheat when pretending to be on business trips, or someone’s using a clone of her account to catfish people.

What I don’t understand is WHY this guy would ever swipe right on his wife and make it even weirder than it already was. Screenshot, text your wife and be honest up front and she’ll believe you, assuming you don’t have a history of lying. Don’t take this onto Reddit so it filters out into the rest of the Internet for everyone to read.

What do you guys think, is she cheating? Is he being catfished? Was one of her friends tracking him? A fourth possibility?