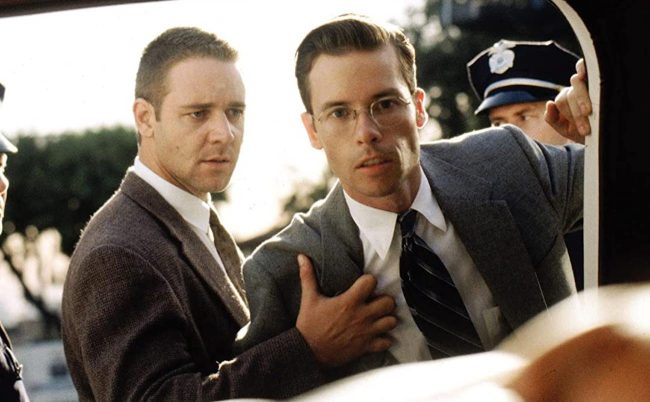 Do you remember your first day of your career? Where you were, what you wore, how the weather was that day? I certainly don’t. Does that have to do with the fact that my first job out of college sucked, so I’ve essentially blocked it from my memory? Yes. Could my generally subpar memory be a contributing factor? Of course. But mainly it’s just because my first day of work out of college wasn’t all that exciting — I hoped on a bus, I stared at a screen for eight hours, and that same bus then took me home. Certainly not as memorable as, let’s say, being thrown around a room by a behemoth Russell Crowe, like Guy Pearce was in his first American movie, L.A. Confidential.

Now, to be clear, while Guy didn’t necessarily film this scene on his first day on set, L.A. Confidential was, in fact, his first American movie, thus making his experience on the film all the more memorable. I had the awesome opportunity to interview Guy this week, so I asked him what it was like filming that legitimately intense dust-up, and if anyone caught any stray elbows or fists to the face while filming.

As a reminder, here’s the scene in question:

“While filming Blade Runner 2049, Harrison Ford famously punched Ryan Gosling in the face,” I began. “Anything like that happen to you while you guys were filming your pretty intense dust-up?”

“I don’t think that there was anything that, sort of, accidentally happened any more than normally would,” Guy began.

“Maybe as Austrailians, we might have a broader threshold as far as, you know, pain. I’m not sure. He threw me around the room though! You know, he said to me: ‘I’m gonna throw you around the room, you alright?’ And I went, ‘Yeah, throw me ’round the room, throw me across the table.'”

“Other people might’ve thought that perhaps it was too much, but we’re brought up in Australia on film sets to go, ‘If you’ve gotta be thrown against that wall over there, get ready for it.”

“Plus, now in the days of CGI, and wires…” I said before Guy cut me off.

“No, I know,” I replied. “I’m saying you can really tell: he’s throwin’ you across that room! It feels real.”

“And also, I was like, 27,” Guy pointed out. “Now I’m 53. If he threw me across the room — firstly, he would do his back, and I would probably break my neck as I hit the wall. They’d be like ‘Cut! Cut! Take two weeks break, everyone. Guy’s broken his neck, Russell’s done his back, let’s take a break, we’ll be back in a couple of weeks.”

Guy Pearce getting beat up by Russell Crowe in 'L.A. Confidential', and more on Friday's @PostCredPod 🍿

RELATED: We Asked Guy Pearce How It Feels To Be A Lyric In A Drake Song

You can catch Guy Pearce in his latest film, The Seventh Day, when it hits theaters and on-demand on Friday, March 26. You can also listen to our full interview with the remarkably underrated actor below, where we dive into getting beat up by Russell Crowe in L.A. Confidential, his career-making turn in Memento, why Prometheus is actually a masterpiece, making MCU magic with Robert Downey Jr., and more.