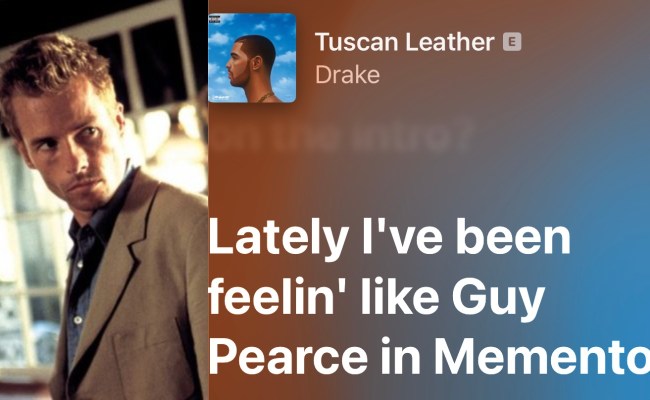 Whether you’re an A-Lister or a soap opera actor, an Academy Award recipient or a Razzie winner, regardless of how famous you are or how successful you may be, being lionized into history through a rap lyric is an achievement unto itself.

Not only is being included in a rap song a sign of simple respect, but it’s also confirmation that whatever it is you’re doing — whether it be your specific performance or the general success of the project you’re in — is doing well. One of the primary goals of a rapper is to come off as cool, which means shoutouts aren’t just handed out to anyone, as the person and their status must also stand for something worth rapping about, something cool. Guy Pearce in Memento certainly qualifies as all the above.

Despite the fact that Christopher Nolan’s Memento was released in the year 2000, 13-years-later, on his 2013 album Nothing Was The Same, iconic global rapping superstar Drake name-dropped both Pearce and the film on the excellent opening track “Tuscan Leather”, a song that I used to absolutely CRUSH back when I was in college.

Given the opportunity to interview Pearce for his upcoming film The Seventh Day, I simply couldn’t let the opportunity pass me by without asking how it felt to be shouted out by one of the world’s most famous musicians. As you’d expect, Pearce was wildly appreciative of Drake and his shoutout to his career-defining turn in Memento.

“Yes,” Pearce replied when asked if he knew his name was in a Drake song. (I wish you could’ve seen his face when reacting to my question)

As promised, Guy Pearce on his Drake lyric in “Tuscan Leather” and a bonus 'Memento' question that may have been the most important thing I asked him 🍿 pic.twitter.com/p6AwrLCLB6

You can catch Guy Pearce in his latest film, The Seventh Day, when it hits theaters and on-demand on Friday, March 26. You can also check out our full interview with the remarkably underrated actor on Friday’s Post Cred Pod episode, where we dive into getting beat up by Russell Crowe in L.A. Confidential, his career-making turn in Memento, why Prometheus is actually a masterpiece, making MCU magic with Robert Downey Jr., and more.