Badass Records Goodbye Message To His Family Before Driving Through Raging Wall Of Cali Wildfire, Survives 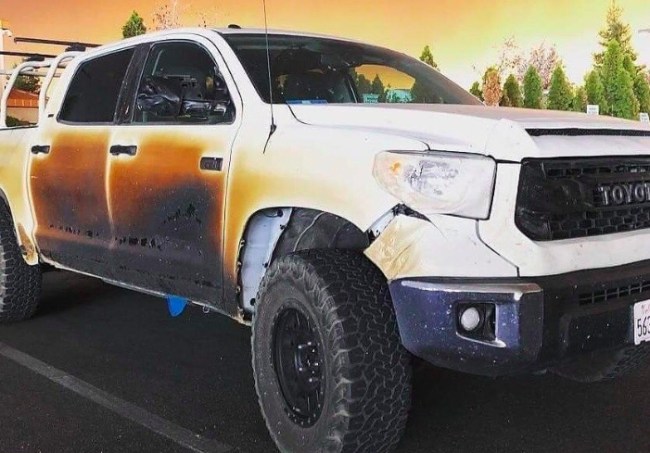 At the time of me writing this, the California wildfires have claimed 44 lives, as emergency workers recently discovered 13 more bodies in Northern California. The death toll makes the fires the deadliest in the state’s history, and that number is only expected to rise as nearly 100 remain missing. Previously, the deadliest fire was the Griffith Park Fire which killed 29 people in October of 1933.

The raging fires have also destroyed more than 7,600 structures destroyed, most of them homes. Joel N. Myers, founder and president of AccuWeather, estimates that the total damage and economic impact of the California wildfires has already surpassed $80 billion, and will likely climb to nearly $200 billion by next week.

The Camp Fire, which began blazing in Northern California on Thursday, has killed at least 42 people and torched 117,000 acres of land. According to the New York Times, as of Monday night, the fire remained just 30 percent contained.

As death, destruction, fear, and panic ravage California, stories of heroes will rise above the ashes. One already did.

Jack Nicas of the New York Times detailed an incredible story of a man named Allyn Pierce who was faced with a wall of fire as he sit trapped in his truck.

“I was like, ‘I think I’m done,’” said Mr. Pierce, a registered nurse who was trapped in traffic in Paradise, Calif., where most of the community was burned. “I just kept thinking, ‘I’m going to die in melting plastic.’”

I’ll let Jack Nicas take the story from there.

Allyn manages the ICU at Paradise's hospital, Adventist Health, and helped spark the quick evacuation of patients Thursday morning as the #CampFire swept in. Then he hopped in his truck with two colleagues and headed for safety.

Like many residents in Paradise, they quickly hit gridlock. But unfortunately for them, they were stuck in the middle of the fire. Flames licked at the side of his truck, and as Allyn watched other cars catch fire, he thought his was next. Here was his view. pic.twitter.com/2fACEWn4tu

Like many residents in Paradise, they quickly hit gridlock. But unfortunately for them, they were stuck in the middle of the fire. Flames licked at the side of his truck, and as Allyn watched other cars catch fire, he thought his was next. Here was his view. pic.twitter.com/2fACEWn4tu

Allyn held his coat against the window – a futile guard from the intense heat – and put on Peter Gabriel’s “In Your Eyes” to calm himself. He recorded a goodbye message to his family: “Just in case this doesn’t work out, I want you to know I really tried to make it out."

Suddenly a bulldozer appeared & knocked a burning truck next to him out of the way. There was some room to maneuver. But instead of going forward toward safety, he turned around & drove back into the heart of Paradise. Here's the aftermath of his Tacoma. (The lights still work.) pic.twitter.com/LLUU1fDfYv

Allyn ended up back at the hospital and quickly realized injured Paradise residents were also there, looking for medical help. “Now all of us are like, ‘Oh, this is what we do,’” he recalled. “We're terrible at burning to death, but we're amazing at taking care of people.”

Doctors, nurses, paramedics & police started a triage center in the hospital parking lot. They broke into the hospital for gurneys, oxygen tanks & other gear & quickly went to work, treating about two dozen people while the fire raged around them. Photo: Noah Berger/AP. pic.twitter.com/SOOZidkfOF

Then the hospital caught fire. The team quickly relocated the patients 100 yards away to the hospital’s helipad. Eventually authorities cleared a path to safety, so they loaded up the victims & drove out in a caravan. Everyone made it out safely.

Allyn stressed the triage was a massive group effort — and that they weren't heroes. “This is what we do,” he said. “Any nurse, any healthcare worker, any cop, they were there and they all did their jobs.”

In the wake of such a catastrophe, it’s always also to be reminded of the human spirit. If you feel inclined to help out the Pierce family, who lost their home, they’d appreciate it greatly. Here is the link to the GoFundMe.

Props to Toyota for stepping up and getting the man a new truck after his was scorched.

I know it’s only Tuesday, but this dude may be a shoe-in for Bro of the Week. If you have any stories of heroism or simple good deeds coming out of Cali in these tough times, please send submissions to matt@brobible.com to be featured on Friday’s Bro of the Week column.