A Hacking Lightning Cable Is Now Being Mass-Produced, So You May Want To Think Twice About Charging With Anything But Your Own Cable 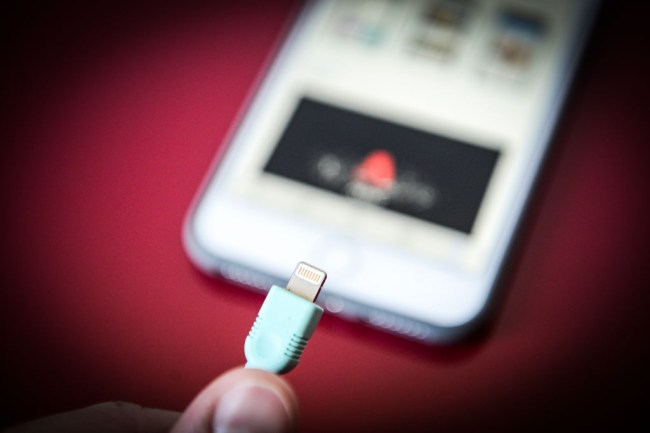 Oh, awesome, another way for personal data to be stolen.

If you have an iPhone, iPad or iPod Touch that means you have a Lightning cable to charge it with. It’s that cord that comes with each device that turns a weird brown color later in its life and probably something you’ve had to replace after leaving yours somewhere.

Forgetting your charger or finding yourself with low battery happens to all of us. In today’s world, it isn’t that big of a deal thanks to charging stations at a lot of different spots, like Target and Starbucks for example, in most major cities. You also see charging stations at every turn in airports these days.

The thing is, charging your phones in public spots – especially airports – isn’t the safest thing in the world because these cables can pass data

You may have to ask a couple of people before someone says yes, but you would think that the safest route to charging your device would be to ask someone to borrow their cable, well, think again.

According to Fast Company, a hacker has created a Lightning cable that when it’s plugged into your Mac or PC it will allow someone to completely take over your computer, remotely.

It is called the O.MG Cable (clever name) and it’s not one of those things that only a handful of hackers have gotten their hands on, at least it won’t be soon thanks to the cable being mass-produced in factories. Oh, and it also looks exactly like the cable you’re using right now to charge your devices.

The O.MG Cable was first reported by Motherboard’s Joseph Cox when the security researcher who created it, a person known as “MG,” first demoed his handmade prototype at the Def Con hacking conference last summer. The O.MG Cable looks like an ordinary Apple-made Lightning cable and works exactly the same—it will charge a device and transfer data to and from the device just like an authentic Lightning cable.

However, the O.MG Cable also contains a built-in wireless hotspot. This allows attackers to remotely run commands on the Mac or Windows PC the cable is plugged into, which allows them to do, well, pretty much whatever they want—including reading or even deleting your data.

You may be asking yourself ‘well, where and when am I going to need to ask some stranger for their Lightning cable?’ I thought that exact same thing and two places came to mind: the airport and bars.

People get stuck at airports for long layovers and delays, their charger is in their checked bag instead of the carry-on and every charging dock is taken so you have to ask someone.

The bar scenario is probably even more common. Most bars nowadays have a couple of charges for people to use either behind the bar or near the corner and those things get used constantly, especially late night when you’re phone is bound to die at the end of the day. Folks don’t really have any other way to charge their phone so they roll with these without giving it a second thought.

Thanks to this hacker making a new Lightning cable that could thoroughly mess your life up, you may want to think again the next time you’re stuck with no charger.

Related: How A Free Trial Of Malwarebytes Helps You Discover All Sorts Of Malware On Your Phone And Computer