Hand Sanitizer Might Not Stop Us From Getting the Flu 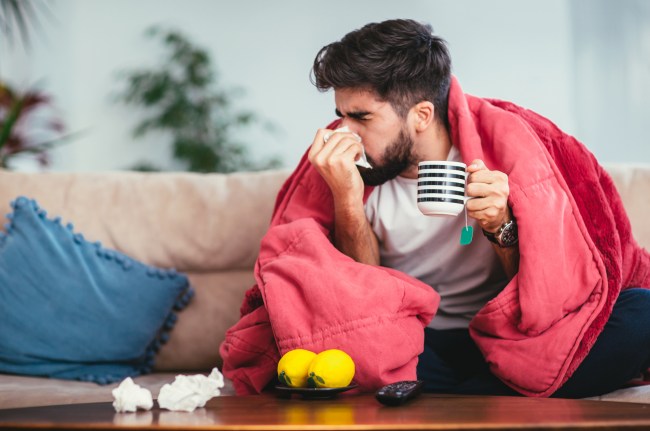 Today, we’re coming at you with some unnerving news that is bound to keep some of you indoors once cold and flu season strikes down with a vengeance and attempts to thin the herd. I, for one, am already researching how to build a germ-free bubble inside my apartment that allows me easy access to beer and pizza delivery. But that’s another story for another time. This right here is serious, so pay attention.

As someone who spends a fair amount of time in airports, it has been somewhat of a comfort that regardless of how many sick bastards are in there coughing and wheezing, spreading vile, crippling plagues to God and everybody, I can always reach for my trusted bottle of hand sanitizer after touching surfaces that I suspect are covered in ick. I mean, come on, there is no way in hell I would ever use the crapper in those places if it weren’t for the fact that science tells us that my good friend ethanol alcohol, the primary ingredient in hand sanitizer, kills more than 99.9 percent of all germs. It’s kryptonite to those godforsaken puke and diarrhea bugs that start coming alive this time of year.

Truth be told, it is having the ability to disinfect my hands around the airport terminal, in the grocery store or any other place where disgusting humans must roam that keeps me from becoming a shut-in and living like Howard Hughes. So you’d damn well better know that I just about had a panic attack strong enough to give me a lazy eye and a stutter earlier this morning when I stumbled across a new study that finds hand sanitizer is powerless in preventing the flu. And I don’t mind telling you, after getting stuck in the petri dish known as LAX for 10 hours over the weekend, I’m not feeling so good.

A team of Japanese researchers wants us to know that rubbing alcohol-based gunk all over our hands is no safeguard against those nasty strains of influenza that put thousands of people’s heads in the toilet every year.

The study, which was published in the latest journal mSphere, finds the flu virus can survive on the fingertips of people who use this product. Get this, not even after leaving it on for two minutes was it any more effective at killing this disease. In fact, it wasn’t until after the hand sanitizer got four minutes to go to war that the flu began to die. Four minutes. That’s almost as long as a round in the UFC!

Of course, this means that those of us who are diligent about using a dab of hand sanitizer after going to the bathroom and before we eat are not really doing ourselves much good. No, apparently, we must soak our hands in the stuff before those microscopic assassins get dosed up enough to meet their demise. So for those of you who want to keep your immune systems from getting pummeled into submission this year, start applying the hand sanitizer a bit more liberally than in times past.

Scientists associated with other studies over the effectiveness of hand sanitizer say the product is still the most reliable option out there when trying to avoid the yacks, the craps and the shivers. Alcohol-based cleaners, while not perfect, are still a better way to go than just washing up in the sink.

“In our studies hand sanitizers worked pretty darn good compared to soap and water,” microbiologist Dr. Charles Gerba, a professor at the University of Arizona, told CBS News Boston. “The reason why is most people don’t wash their hands enough to kill the germs. We’ve done surveys and watched people and timed them. It comes out to only 11 seconds. So nobody really does it long enough.”

But we’re not dead yet.

Researchers connected to the latest study said that hand sanitizer only takes longer to kill the flu virus when it is contained in wet mucus. Dry flu germs were knocked out within 30 seconds. So if someone sneezes into their hands and then touches something, the bugs in it are going to be more resilient until the snot dries up. However, just to be safe, I’m running out today and buying some hand sanitizer in one of those industrial size 68-ounce jugs. I’ll pump the shit out of it on my next journey through the American airport system. You can bet on it. The only problem is getting such a monstrosity through TSA and its three-ounce rule. Oh well, I guess I’ll just have to toss 30 or so small bottles in my carry on. That ought to do it. Now, it’s time to rock out on that bubble project!