How To Avoid Drinking Tainted Alcohol While On Vacation 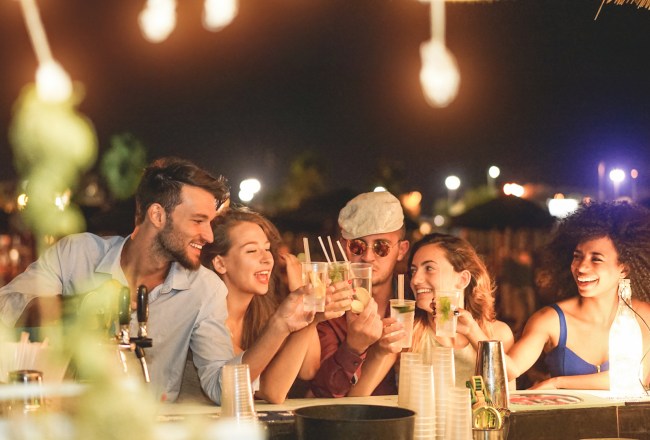 Our passports should come with warning labels.

Just a little something-something to make newcomers to the world of international travel-aware of the risks they are taking as soon as they cross the pond on vacation.

Not only is it a possibility that their plane will mysteriously disappear somewhere over the ocean, never to be seen again, but it could also spontaneously combust, crash into the side of a mountain or just plummet to the bottom of the sea at shit-yourself speeds.

But even if the plane lands safely, which it does most of the time, travelers, especially the young, beautiful ones, always stand a chance at getting snatched up by a pack of Russian goons and sold into the dark underworld of sex trafficking.

You’ve seen “Taken,” haven’t you? That shit is real as fuck, and unless your dad is Liam Neeson, chances are you’ll never be heard from again.

But perhaps the most treacherous aspect of traveling abroad, even if you are an ugly bastard and have no value on the pay-to-hump market, is the risk of getting snuffed-out by tainted booze.

We’re not even playing. There have been numerous reports of people getting sick and also dropping dead in some countries because they partied too hard with “counterfeit” alcohol.

It seems that some janky organizations are producing some mean-ass liquor that contains methanol as opposed to ethanol.

Some reports indicate that this is likely happening as a result of improper distillation practices, or just as a cheap additive to give the concoction a little zing.

But the problem is methanol is a fierce beast that is not fit for human consumption.

Just about two ounces of the stuff is enough to send someone to the great hangover in the sky. Of course, it stands to reason that we’d like to avoid these gnarly concoctions with every fiber of our being.

Because the best part about getting drunk is living to tell the tale of the night in the years to come.

So, in the spirit of memorializing the guilt and regret that all of us will surely amass in our drunken pursuits, here are a few tips for avoiding the death rattle while binge drinking abroad.

The problem with fake booze is it might not appear any different than the stuff that’s on the up-and-up.

These bastards are professionals, and they’re manufacturing a product similar in appearance to the real deal.

Therefore, before traveling to another nation, it is crucial to find out whether any bad liquor warnings have been issued.

And while a native might be able to sniff out the difference in this liquor by examining the label, a tourist never could.

Check with the health ministry. If there are warnings out on certain products, avoid them at all cost.

If It Looks Sketchy, It Probably Is

While all of us can undoubtedly appreciate cheap drinks, especially after we’ve just dropped a shit load of cash on airfare and lodging, there is trouble to be had when going for a cheap drunk in exotic places.

While some counterfeit booze is made to look like the real thing, other manufacturers are apparently not even trying to hide the fact that their beverages were brewed up in an outhouse somewhere just outside of Bangkok.

Listen, man, if someone puts a drink in front of you and not even the flies will land on it, that’s a relatively solid indication that things are about to go south.

Don’t be a fucking hero out there. Always take the safe bet when it comes to alien beverages.

There is no shame in stepping back to make sure the locals are sucking it down before getting into it yourself. Whatever it takes. Just don’t go tossing questionable cocktails down the old gullet.

Now for the pro tip: Stick to beer when traveling in areas where they can’t afford to wear shoes.

Know When You’ve Been Poisoned

Once your buzz starts to enter new territory, it’s time to get concerned.

Methanol poisoning is said to start similar to an ordinary drunk. It causes a person to feel “drowsy, unsteady, and disinhibited,” according to the World Health Organization.

But if you or a travel mate begin having trouble breathing (or hyperventilating), experiencing vision problems (blindness has been reported), or go into convulsions, it’s time to get some medical attention.

Even if it’s not alcohol poisoning and a member of your crew is just a lightweight and can’t hold his liquor, you never want to take any chances with this sort of thing.

After all, shipping a corpse back to the United States is nightmarishly expensive.

The cost is based on weight, so if your buddy was a real fat fuck, that bill could reach $20,000 or more.

And we don’t have to tell you, that doesn’t leave a whole lot of cash left over to drink on for the rest of the trip. Let’s try and bring em’ all back alive, okay?