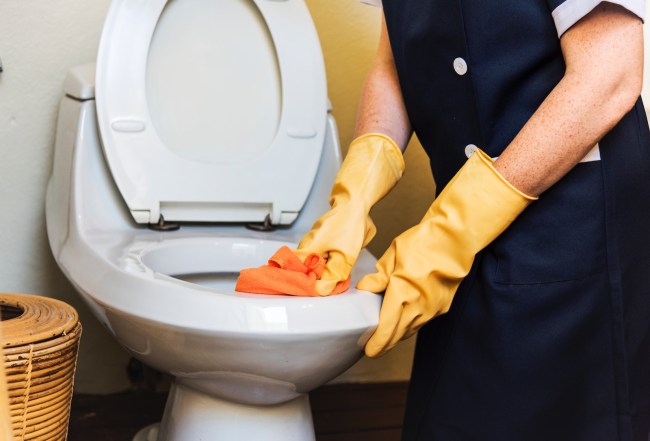 Men are more fortunate than women in many ways.

We’re lucky that nature does not require us to squeeze tiny humans out of our dick holes, and when it comes to using a public bathroom, we’re lucky that nine times out of ten we just have to take a squirt.

So, unlike our female counterparts, we can navigate that environment relatively easy without ever needing to stick our naked asses too close to those disgusting toilet seats.

But there are those occasions — oh boy, are there ever — let’s say after going overboard on cheap beer and burritos, when our stomachs fly into a state of upheaval, which for all intents and purposes, demands the immediate use and full capacity of a functional crap shack to vacate whatever ghoul is jumping around in there and causing a scene.

But when we get there, the only available stall in the joint looks like ground zero of the vilest event to ever transpire in the history of mankind.

There’s enough gut rot stinking up the place to trigger those gag reflexes, and now, all of a sudden, we’ve got problems erupting from both ends. The only other option is to just shit our pants and face the stiff humiliation that is destined to come from the lips of our unsympathetic friends until our dying breath.

So, rather than risk being called “poopie pants” well into our retirement years, we drop trough and plant those hairy cheeks firmly on the sewer juices of god-knows-what and conduct our business like big boys – Ahhhhhh!

One the worst is over, however, we start thinking to ourselves, “Jesus, what sort of vile diseases have we been exposed to by squatting in the intestinal fluids of those who came before us?”

No matter how much of a badass a person might be, it wouldn’t take long in that situation before they were fully convinced the toilet seat had infected them with AIDS, herpes, and whatever other putrid diseases of the week are floating around fast food shitters these days. But is the threat real?

Well, it is a legitimate concern – the idea that the germs lingering in a public bathroom could somehow find a way to crawl inside another human and make them sick as hell.

After all, this is the reason medical professionals always advise us to wash our hands or apply hand sanitizer after using the facilities. It’s a proactive way to avoid contact with the cold and flu viruses that wreak havoc on society every year.

But it’s not like we can just sanitize our buttholes after hunkering down in the sometimes unsanitary conditions that come with taking a dump in a communal commode.

So, what is to prevent us from catching bugs, especially those dreaded sexually transmitted diseases?

Well, according to a recent article in Health, the chances of anyone contracting an STD from the toilet seat is next to impossible.

Did you notice how we didn’t say it is out of the question—100 percent guaranteed?

“STDs don’t usually survive when they fall off the human body,” said Health Advisory Board member Christine Greves. “A toilet seat doesn’t offer an environment for STDs to thrive, so it can’t live there for more than 10 seconds. They much prefer the environment that warm human tissue and fluids create, not that of cold, hard toilet seats.”

Even the Centers for Disease Control and Prevention says it not likely for someone to catch an STD from a toilet seat. That is unless, of course, you happen to have a dick in your mouth while you are sitting on one. At that point, all bets are off.

Regardless, it is always wise to take the necessary precautions to protect yourself from the disgusting remnants of others whenever it is humanly possible. And while it might not be necessary to delouse our keisters every time we use a toilet in a public facility, it is well-advised never to miss an opportunity to scrub those paws.

Everything a person touches in the bathroom is a breeding ground for thousands of sex-starved bacteria that can easily infiltrate our bodies and unleash the savage wrath of sickness.

So wash up, always.

But, unfortunately, it doesn’t look like some of us are going to be using the old “we must have caught it from a toilet seat” excuse any more when those significant others come home pissed off about being diagnosed with crabs at the OB-GYN.

We hate to say it, boys, but you might have to start getting creative.