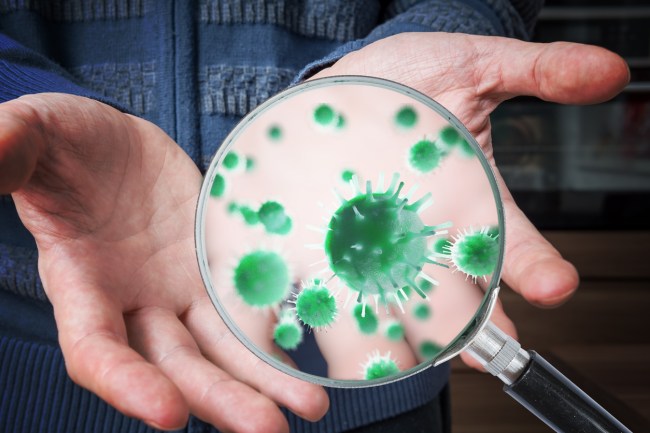 For the functional germaphobe – someone who can still get out amongst society from time to time as long as they have their trusty hand sanitizer close by — standing in an airport can be as scary as, let’s say, getting buck naked in front of a bunch of strange men for the first time in a prison shower.

You never know what kind of unknown threats to personal health linger just around the corner.

I mean, there’s all sorts of nasty shit out there. Everything from the Zika virus to the “Gaffle,” which, as far as we can tell, is a strain of redneck funk found in parts of Eastern Kentucky, namely Perry County, vicious enough to form a chicken leg out the back of its victim’s neck.

On second thought, there is no cure for prison plunder. What’s done is done, we’re afraid.

So, maybe hanging around a test tube terminal of dread waiting for a plane to catapult you across the country is not as frightening as some massive, hairy beast with a neck tattoo carving a makeshift ball gag out of a bar of soap and a dirty tube sock, but it is in the ballpark.

Public places, in general, are veritable Petri dishes. And all of those coughs and sneezes that seem to be firing off in every direction make most germaphobes seize up like a kid with Dravet Syndrome; so much, in fact, that they will actually hold their breath for durations that qualify them for the Navy SEAL team.

I know this to be true, as this is my reaction when waiting for a flight, especially during flu season.

Contrary to what that douche hound Pete Hegseth from Fox & Friends says about germs being figments of our imagination, researchers from the University of Bristol tell us otherwise.

Not only are these contagious booger breeders real, but each time a person sneezes or coughs somewhere around 100,000 of them come flying out at a rate of nearly 100 miles per hour.

That’s a whole lot of cases of explosive diarrhea, the pukes and sheet-soaking fever getting launched into the air we breathe when some inconsiderate imbecile with the plague of the day doesn’t cover his or her mouth.

And the godless viruses that come drag racing out of the lips and nostrils of the sick are fast to infect. Researchers say these bugs are most likely to set in and cripple a healthy person’s immune system within the first few minutes after being hurled into the world.

But they can “remain suspended in the air for prolonged periods, from seconds to weeks.” So, if a person sneezes inside an airport today, another person might be infected by their germs days or weeks into the future.

Are we the only ones thinking that airports should be pumping Lysol into the ventilation systems?

Scientific minds are trying to get a better grip on the spread of diseases in hopes of bidding farewell to the days when humans are infected by the atrocious grossness of others.

There is a new device called CELEBS that may help further this research and ultimately save us all from an untimely demise. It is being used to help them gain a better understanding of precisely what happens when pathogens and airborne diseases are flung from the human body and in the vicinity of others.

Learning more about this process, researchers say, is the key to eliminating the days when commonly spread illnesses like the cold and flu are passed around with such intensity. It might even prevent germaphobes from suffering brain damage as a result of holding their breath too long.

“Despite much research on such microorganisms, there remain important questions for understanding disease dynamics, such as, why do some infections exhibit seasonal peaks in incidences, and why is person-to-person transmission often linked to the early rather than later stages of the disease? Understanding these processes in greater detail at the single droplet scale may lead to better or alternative mitigation strategies,” lead researcher Allen Haddrell, PhD, told Healthline.

Until science gets all of this germ business figured out, however, there are some easy things a civilized person can do to prevent the spread of internal defects.

Covering your mouth during those coughing or sneezing fits is the right place to start.

The next solid move is washing your hands or using hand sanitizer to kill the lingering funk.

For those beaten down by deep malaise and who cannot avoid being in an airport or other highly-populated places, wear a fucking mask.

It might not be the most fashionable accessory to your trailer trash ensemble – sweatpants are apparently the official wardrobe of air travel — but it might prevent others from catching that vile shit. It sure beats being dragged into the airport shitter by a gang of angry germaphobes, who in the last ditch effort to rid you from their flight try to flush your sick ass down into the sewer system.

But, of course, not before closing the lid. Experts say flushing the toilet with the top up can spray germs nearly three feet in the air and as far as six feet.