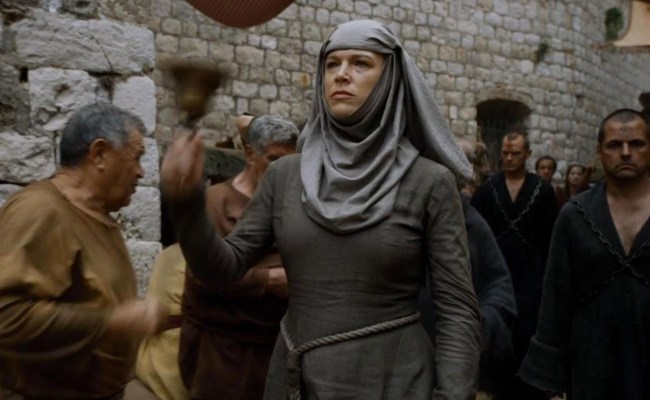 Alright, look — I don’t want to pile of David Benioff and D.B. Weiss, the (now-disgraced?) showrunners of Game of Thrones. Dunking on both them and the series itself has become the trendy thing to do, which is something I simply cannot abide by. Legitimate criticism? Sure, have at it. But I’m not going to sit here slinging shots at the “Double Ds” just because that’s what everyone else wants to hear.

That said, I mean… what the hell, guys? Are you out of your mind? Waterboarding your own staff? If you listen to the video for yourself, you can tell that Hannah Waddingham — the Ted Lasso star who played Septa Unella in the series — is legitimately traumatized by the whole thing.

According to Waddingham, who now enjoys a much, uh, cushier role in Ted Lasso, the decision to waterboard Unella was actually made quite late in the process, as the original plan was, and I quote, to have The Mountain rape her instead. Yikes, man.

“I think they possibly changed it when I was mid-air flying to Belfast because suddenly I got sent these new sides that said that I would need a wetsuit top,” Waddingham said. “I thought they’d sent me the wrong bits. And sure enough, when I got there, I was then put in a wetsuit top and I was like, ‘Because?’ And they went, ‘Oh, it’s waterboarding instead.’”

“There I was strapped to a wooden table with proper big straps for ten hours,” Waddingham said. “Definitely, other than childbirth, it was the worst day of my life. Because Lena was uncomfortable pouring liquid in my face for that long, and I was beside myself. But in those moments you have to think, do you serve the piece and get on with it, or do you chicken out and go, ‘No, this isn’t what I signed up for?’” [via Collider]

As a result of the grueling scene, Waddingham said she had to seek out therapy due to a newfound fear of water.

“I hadn’t even realized that it definitely gave me claustrophobia around water,” Waddingham said. “Definitely. I hadn’t realized until I watched a program where the camera’s down on the actor’s face and they’re being dipped into the water, but you see them face-up to the camera, and I got in a terrible panic about it. I actually went and had a bit of a chat to somebody about it, because it’s quite full-on, being waterboarded for ten hours, and then only one minute and thirty seconds can be used on camera.”

You can next see Hannah Waddingham when she returns as Rebecca Welton in season two of Ted Lasso, which premieres on AppleTV+ on Friday, July 23. As for Benioff and Weiss, they haven’t been able to get a project off the ground since Thrones ended: their announced HBO series Confederate was canceled, both literally and symbolically, into oblivion, they were fired from their Star Wars gig, and their first Netflix series, The Three Body Problem, has turned into a literal, real-life murder mystery conspiracy. I kid you not.

I, for one, am absolutely shook. pic.twitter.com/c0Pb6pSVa6

RELATED: The ‘Game of Thrones’ Guys’ Next Project Is Turning Into A Literal Murder Mystery In Real Life