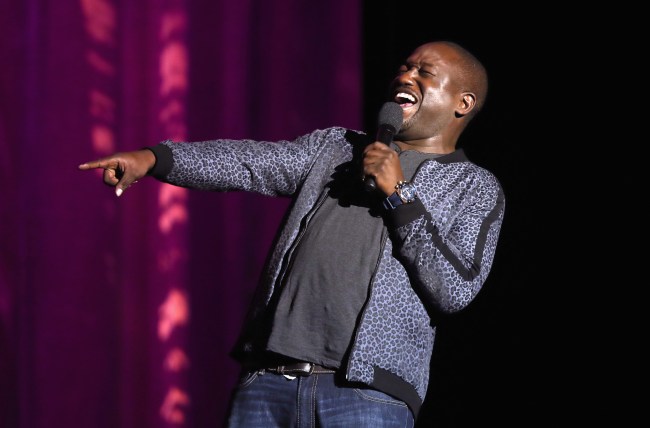 Loyola University Chicago is currently basking in the glory of its Men’s Basketball team appearing in its first Sweet Sixteen in over 30 years. With the enhanced exposure, alumni donations will flood in, future applications will sore, and merch will fly off the shelves. It would be very easy for the faculty to not fuck it up.

While performing a standup set at the Jesuit Catholic university, Hannibal Buress was booted off the stage after he shared an image from some correspondence he received from the school about topics that were banned–including “rape, sexual assault, race, sexual orientation/gender, and illegal drugs.”

The Chicago native responded to the restrictions by saying: “Ya’ll fuck kids, right?”

According to students in attendance, Buress’ mic was cut and he tried to perform without a mic, but background music in the arena was turned up and the lights went on. He then left the stage.

The Consequence Of Sound reports that Buress was allowed to return to the stage after a 15-minute break and some boos and calls for refunds by the antsy crowd. He then proceeded to joke that his check for his set already cleared.

The backlash has prompted Loyola to make the following statement to the Chicago Tribune late Monday:

“Loyola University Chicago cut the mic on Hannibal Buress’s performance Saturday, March 17, because he violated the mutually agreed upon content restriction clause in his contract. It is standard for the University to include a content restriction clause in entertainment contracts; Buress is the only entertainer to disregard the clause to the degree that his mic was cut. Buress eventually returned to the stage and completed his set.”

Is there a better way to make a group of people resent you than demonstrating that you believe their entire ideology will change after hearing a comedian make potty jokes? Be more disconnected from reality. You can’t.