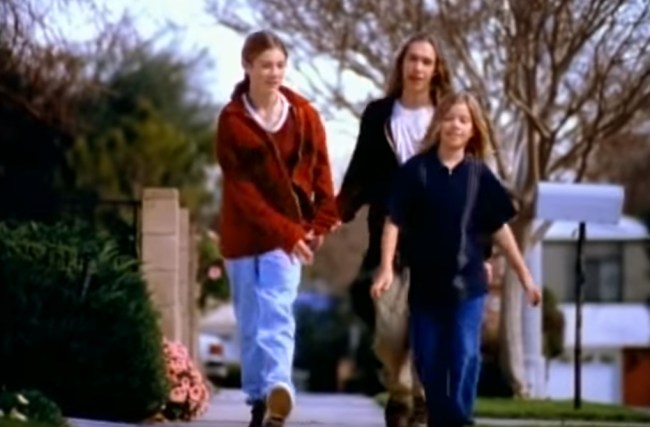 Hanson released the supremely-catchy MMMBop 21 years ago and the former kid band finally revealed what the real meaning of the Grammy-nominated song is. The meaning to the hit song is what 90s kids have been asked for over two decades and now they finally have their answer.

The Hanson brothers, Taylor, Isaac, and Zac, released their debut studio album Middle of Nowhere on May 6, 1997, when they were all between the ages of 11 and 16. The album included MMMBop, which was instantly successful. The hit single reached #1 in 27 countries and stayed at number one for 3 weeks. MMMBop sold 710,000 copies and was named as one of VH1’s “100 Greatest Songs of the Past 25 Years” as well as #20 in VH1’s “100 Greatest Songs of the 90s.” The remarkable debut single was nominated for two Grammys at the 40th Annual Grammy Awards.

E! News interviewed the brothers from Hanson to talk about being in a band together for 25 years and to give some insight on the song that put them on the map. The Hanson brothers were asked what the meaning of MMMBop is and Zac Hanson finally revealed the origin of the quirky song title.

“A lot of people ask what MMMBop means. Well MMMBop as a word, it represents time. It represents the fact that time passes very quickly…And so in a story about reaching for what’s important and kind of driving towards the impossible dream, MMMBop is telling you: go now, go now, go now, because in a moment, in an MMMBop, life will be over and have passed you by.”

Such a deep and accurate take on life from the youngsters.

In a 2016 Vulture interview, Taylor went into depth about the lyrics of MMMBop.

“It does tap into a theme we’ve continued to have, which is to interweave relatively serious thoughts — the verses, you know, ‘You have so many relationships in this life / Only one or two will last / You go through so much pain and strife / You turn your back and they’re gone so fast.’ It’s not exactly sunshine and rainbows, but it’s packaged in a way that it’s looking for the moral to the story.”

So even though it sounds like a happy ditty, the song touches on darker themes. And did you know that the original version of MMMBop wasn’t as cheery, upbeat, and poppy as the final version that was released?

MMMBop “took about a year to actually get completed,” said Isaac. “The chorus idea had really been around for a long time, and then we built the song around it.” The iconic chorus for the hit Hanson song was actually “started as a background part during the making of our previous independent album, called ‘Boomerang.'” The brothers shelved the catchy chorus for a year and Taylor suddenly remembered it when the boys were writing MMMBop.”

The Hanson members say that they’ve never heard a quality cover of MMMBop, but “if Bruno Mars were interested, he’d probably find a way to kill it.”

MMMBop was so extraordinarily popular that the Hanson brothers were able to create a beer company out of it, aptly named “MMMHops.”

Hanson was able to even start their own music and beer festival inspired by MMMBop and MMMHops called “Hop Jam” that Zac calls “an annual Hanson party.”

MMMBop was such a major hit that the Hanson boys suffered disappointment during their quest in creating another monster chart-topper. The 2006 documentary Strong Enough to Break told the story of how the Hanson brothers strived to make a follow-up hit and the obstacles they encountered while attempting to do so. Strong Enough to Break was nominated for Best Documentary at the 10th Annual Hollywood Film Festival in 2006.

Hanson, which has sold over 16 million records worldwide, is still going after being together for 25 years and even have a new album titled String Theory coming out next month. When asked about being in a band of brothers for a quarter of a decade Taylor joked that they’re “tired, we’re very tired.” Taylor Hanson then got serious and said, “You know, 25 years is a big deal, and obviously it’s been our life and so you experience it day by day…but being able to put that kind of landmark on what you’ve done, I think there’s a sense of gratification, a sense of completion, that you’ve completed maybe the hardest part, which is to understand who you are.”