Happy Birthday To Ernest Hemingway, The Man Other Men Quote To Sound Manly 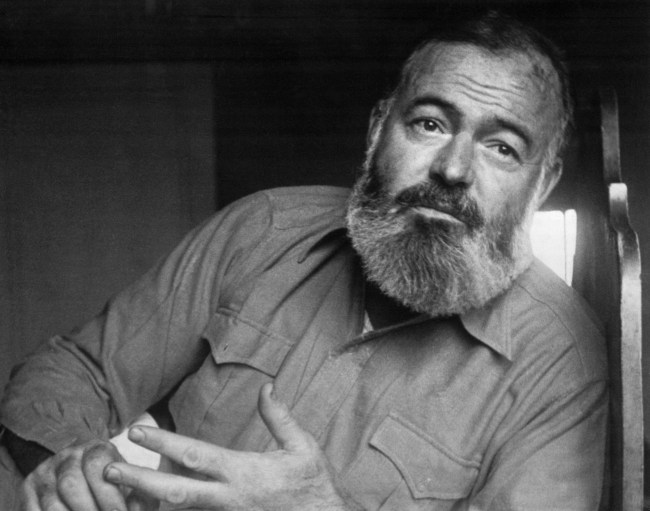 Today WOULD BE Ernest Hemingway’s 121st birthday, had he lived a healthier lifestyle, subscribed to transcendental meditation, consumed his daily green juice, and—most importantly—not shot himself. A titan of the typewriter, Hemingway’s work has endured perhaps better than that of any other American author. And today, as an American male, it is my duty to honor him by letting people know that I’ve read tons of Hemingway and I love how he illustrates fishing and this was the last great man’s man.

The irony behind this irony is that I actually do love Hemingway. Maybe that makes me a basic brotch. But I pat my back assuringly and say that I don’t just like The Old Man and The Sea or The Sun Also Rises or For Whom The Bell Tolls. I’m the indie film-goer of Hemingway, and my favorite is actually Islands In The Stream. Well, the first part, then it gets a little… dark. Point is, I KNOW HEMINGWAY BETTER THAN YOUR BOYFRIEND. He’s a fair-weather fan and only likes the hits. He’s a poser, like most bros who keep a copy of A Farewell to Arms on their reclaimed oak Etsy nightstand, COVERED in water glass rings. Pig.

To continue this stroll down hypocrisy lane, here is my favorite Hemingway quote of all time, from A Moveable Feast:

“They say the seeds of what we will do are in all of us, but it always seemed to me that in those who make jokes in life the seeds are covered with better soil and with a higher grade of manure.” —EH

First, I love this quote because I read it only a few days after I made the decision to try comedy. This felt like ol’ Ernie saying he approved of me, liked me more, that I was made of richer soil and horse dung. That meant a lot at the time.

Second, you know a man is a real Hemingway fan when he abbreviates the quote attribution to EH. Why? Because EH signed many of his letters that way. Did you know you can buy authentic, handwritten Hemingway letters on eBay for tens of thousands of dollars?They’re always written to someone else—usually a random friend—and the context of the messages aren’t always clear. But if you’re a real man, you’ll buy one of these for your man cave. Stick it right between your autographed Muhammed Ali underwater boxing poster and the chalk scoreboard for your dart league. That’ll let everyone who comes over know that not only do you read, but you’re also a man. Usually those two things do not go hand in hand. Enjoy the sex, pal.