David Harbour, Millie Bobby Brown Hint That The Death Of A ‘Stranger Things’ Character May Not Stick 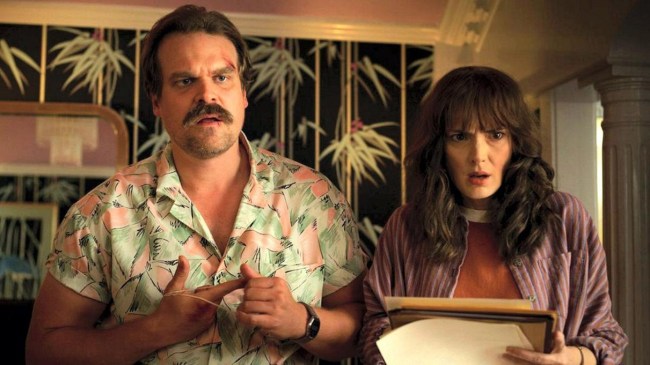 Netflix probably wishes it could release all of its major series at the beginning of a long weekend because the timing of the release of Stranger Things 3 gave much of America plenty of time to binge-watch all eight new episodes.

Opinions of those who did just that with regard to how season three stacks up against the first two seasons may vary, but one thing is for sure, everyone who watched season three was not very happy with a certain character being killed off.

SPOILERS AHEAD, AS IF YOU SOMEHOW HADN’T FIGURED THAT OUT YET.

Okay, so, you’ve watched all eight episodes of Stranger Things 3 so you know EXACTLY whose death I am talking about here. The looks on the faces of Joyce Byers and Chief Hopper when they know it’s the last time they will ever look at one another was absolutely heartbreaking wasn’t it?

That being said, the way it was done made me react differently than I thought I would. I have always maintained that if The Duffer Brothers killed off Hopper I was going to riot, but somehow, while sad AF, it didn’t feel that wrong.

Granted, NO ONE wants Hopper to be dead, especially if there is going to be a Stranger Things 4, and based on comments from the man himself, David Harbour, as well as his TV daughter Millie Bobby Brown, we may not have seen the last of Big Jim.

Speaking to Entertainment Tonight, both Harbour and Brown certainly left the door open to his return.

The key to Hopper’s return may lie in that odd post-credits scene at the end of the season three finale where one Russian says to another, “No, not the American.”

ET: We’re very interested as well because when we read the subtitles of the Russian soldiers, they said, “No, not the American.” Please tell us that the American prisoner behind that door is Hopper!

David Harbour: I mean, I have no idea! [Laughs] I have no idea! I mean that, of course, is my hope too. It seems pretty crazy though. You know, that machine went off and blew up and Hopper seemed to be trapped there. He did glance around a little bit, but he seemed to be trapped and the machine exploded. And then you cut to, what was it? It starts with a ‘K’ or something – some town in Russia, right? Where there’s some American and there’s some other prisoner. I don’t know, I mean it seems strange. I don’t know how though.

When asked if we can still hold out hope that Hopper is still alive, Harbour seemed to hint that his days wearing the badge may not be done, saying, “I mean, we should always hold onto hope. We should never let go of hope – but Barb is really dead.”

Finn Wolfhard, when asked about Hopper’s death, also didn’t seem to think it was the end for the Chief, “I hope Hopper isn’t fully gone, but I feel like he’ll be coming back. I don’t think he’s gone forever.”

He is so coming back. Right?