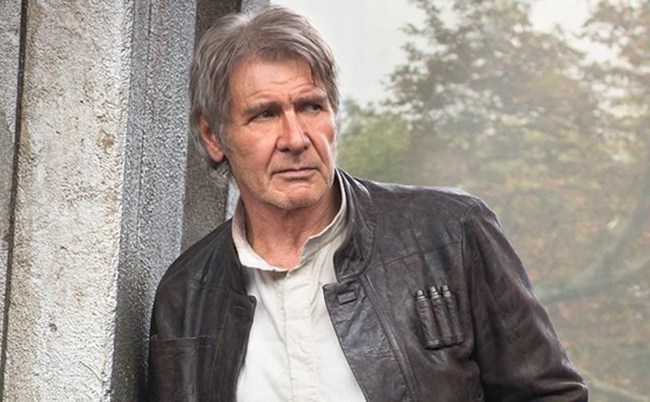 At what age are we officially allowed to stop giving a fuck? 60? 70? You know, that point where you abandon all of the societal norms that you’ve strictly adhered to for your entire life and just start saying and doing whatever the fuck you want? Mowing the lawn at 7 a.m. on a Saturday, taking naps at 1 p.m., telling waiters that you want your food reheated after you overtly and uncomfortably flirt with them, you know what I’m talking about.

Harrison Ford certainly does, as he’s essentially been a grumpy old man for my entire lifetime. Now, while some may take that as a slight, I actually mean it as a compliment: Harrison Ford knows he’s Harrison Ford so he acts however the fuck Harrison Ford wants to act. And usually, that’s grumpy. More power to him.

Take his latest comments about Star Wars as a prime example, as he revealed to USA Today that not only does he have “no fucking idea” what a Force Ghost is — you know, which is what he played in The Rise of Skywalker — but he also frankly does not care, either.

USA Today spoke with Ford regarding his shocking return in Rise of Skywalker and learned that the actor was just as stunned as audiences to learn of Solo’s return. “When JJ asked me to do it, I said, ‘Are you kidding? I’m dead!’ “Ford revealed. “He said, ‘Sorta dead. You can do this.’ He hadn’t written anything at that time. But he said, ‘This is going to be great.’ So I said okay. If JJ asked you do something, you’d probably do it too. He’s a very persuasive guy.”

Aside from showing up when Abrams’ calls, Ford said he returned to the character because it helped push Ren’s story forward. “And the chance to do another scene with Adam was great,” he added. Han Solo’s appearance in Rise of Skywalker sparked controversy among fans, who were torn between defining it as Ren’s memory of his dead father, or confirmation of Solo’s status as a Force ghost. “A Force ghost? I don’t know what a Force ghost is,” the sometimes curmudgeonly actor quipped. “I have no (expletive) idea what a Force ghost is. And I don’t care!” [via ScreenRant]

Vintage Harrison Ford. Still, just because he doesn’t necessarily care does not mean he isn’t down to revisit his iconic roles, as the 77-year-old recently said that production on Indiana Jones 5 begins in the coming months. That’ll be… fun?