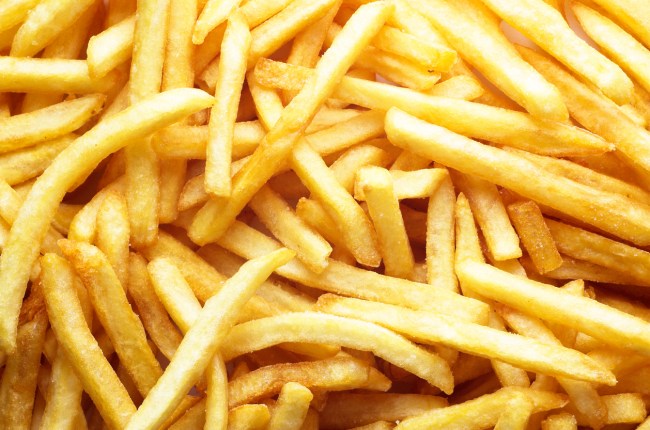 The New York Times has published its fair share of blockbuster exposés over the past few years and did so yet again last week when they gave us an inside look at the dark, dark world of French fries.

The anti-potato propaganda pointed to research suggesting eating fries on a regular basis makes you more prone to that pesky “dying” thing. The author of the piece also spoke to Harvard professor Eric Rimm, who teaches health and nutrition at the school.

Rimm, who definitely orders mixed greens with his bunless burger, called potatoes “starch bombs” that should generally be avoided. However, he did mention that they are fine in moderation, which seemed promising until he revealed his version of “moderation” means never eating more than six fries in a single sitting:

“There aren’t a lot of people who are sending back three-quarters of an order of French fries. I think it would be nice if your meal came with a side salad and six French fries.”

Yes. What a totally realistic solution.

I don’t want to be the guy questioning the scientist who probably asks people to address him as “Dr. Rimm,”  and at the end of the day, he’s going to have his opinion and I’m going to have mine (my opinion is that he is wrong).

I’m not the only person.

Just saw something that said you’re only supposed to eat SIX french fries in one sitting. I’ve never felt so attacked.

What kind of MAD MAN would want six french fries? I get it, they are bad for you, but eating SIX sounds like torture. I’d rather not have them at all. But we all know that’s not going to happen. 🍟 pic.twitter.com/dDT4HYjNUF

You mean like sticking six fries into your mouth at one time? Cause if so, I got that shit covered. https://t.co/Cruo2NnWni

I shove six fries in my mouth at once… https://t.co/gNAOLGlIiV

For me, the biggest takeaway from this story is that we as a society need to sit down and have a serious chat about how we define a French fry.

Are hashbrowns really just a hundred mini fries? How do you measure the length of a curly fry? What the hell are we doing about potato wedges?

It’s honestly insane that it’s 2018 and we don’t have a way to convert shoestrings into tater tots.

Let’s get on that.