Have You Ever Wanted To See Your Dad Kick Your Friend’s Dad’s Ass? Because That’s What Happen In Netflix’s ‘Father Of The Year’ With David Spade And Nat Faxon…

DAD STRENGTH: Just like the dad bod and dadcore fashion, many possess it, few know how to truly harness it. It’s the inner fatherhood super powers that come from years ago child-rearing, manifesting itself in freakish feats of personal strength, specifically, when it comes to a showdown with another dad. Dad strength is on full display in Father Of The Year, a new Happy Madison movie starring David Spade and Nat Faxon, now available on Netflix.

Two hometown buddies, played by Joey Bragg and Matt Shively, return to their hometown after college with no idea what they want to do with the next steps of their lives. After an evening of drunkenly shenanigans, the two friends start imagining whose father would win in a fight. In one corner, there’s Wayne, played by David Spade, a drunk, trailer park lunatic with a penchant for fighting inflatable dancing tube men in car dealership parking lots. In the other corner, there’s Mardy, played by Nat Faxon – a pleated khaki-wearing nerd dad who grew up “obsessed with reserve osmosis” and spends his days toiling in a lab. 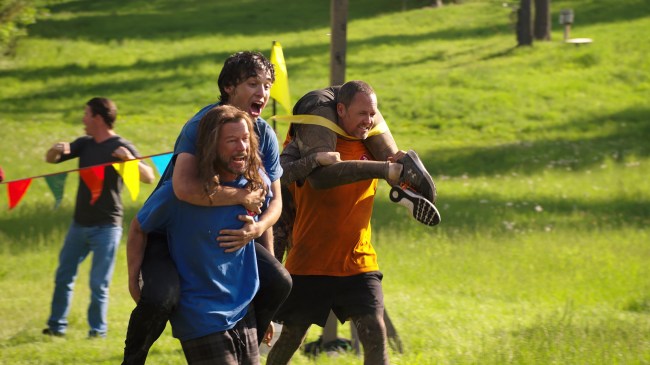 In a quest to impress their sons, the two antagonize each other to the brink of a showdown. So who wins?

Gotta check it out, now on Netflix.