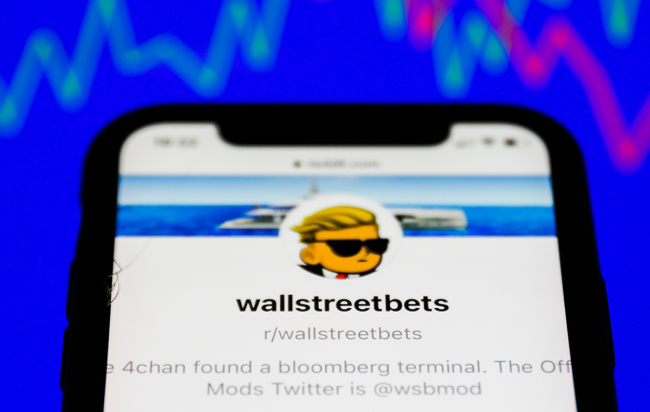 Anyone who’s familiar with the typical lifecycle of a joke on the internet probably had a pretty good idea exactly how the GameStop saga that took the world by storm last month was going to play out, as anyone who scrambled to get in on the action after the movement sparked by Reddit users that turned their focus to the company and other “meme stocks” became mainstream news had no one but themselves to blame for losing money when the shares inevitably cratered.

After spiking from $40 to over $480 a share over the course of a week when r/WallStreetBets attempted to stick it to hedge funds that shorted GameStop and couldn’t resist the urge to broadcast their position to the world, the efforts of the Diamond Hands who urged their fellow speculators to HOLD the line weren’t enough to prevent the massive sell-off that sent the stock plummeting back to Earth as opposed to rocketing to the moon (it’s hovering around the $50 mark as of this writing.)

If you were aware of the existence of r/WallStreetBets before one of your parents called to ask if you’ve heard about “something called ‘The Reddit,'” then there’s a chance you were able to get in on the ground floor and avoided the fate of the people who will probably blame Robinhood for their losses as opposed to their lack of common sense. However, when you consider the community is best described as a road paved with broken dreams littered with the occasional success story, it was pretty obvious GameStop would be just another in a long line of cautionary tales about the dangers of day trading.

The r/WallStreetBets member who started it all may have missed out on an insane amount of money by refusing to cash out, but if he’s looking for a steadier gig, he might have a chance to recoup some of his theoretical losses courtesy of an investment fund that’s on the hunt for a member of the community to spend their days online searching for stonks with the potential to get the GameStop treatment (assuming he’s not disqualified from holding the job after catching the interest of financial regulators.)

According to Gizmodo, Cindicator Capital—an algorithm-based hedge fund (referred to as a “quant fund” in Wall Street parlance)—recently posted a job offering on LinkedIn in search of a “Sentiment Trader,” who will be tasked with patrolling the internet and putting their “refined taste for memes” to good use by scouring Reddit, Discord, and Twitter for The Next Big Thing. 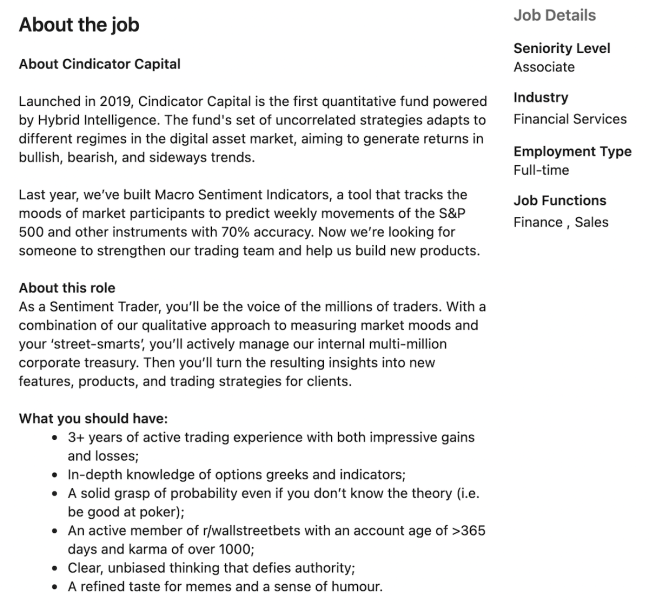 Assuming you have what it takes, you’ll start with a yearly salary of $200,000 and can earn even more in bonuses (assuming you don’t kill a member of their risk assessment team by making a call that results in Cindicator meeting the same fate as Citrion, the hedge fund that got absolutely obliterated after it’s GameStop short came to the attention of retail investors.) 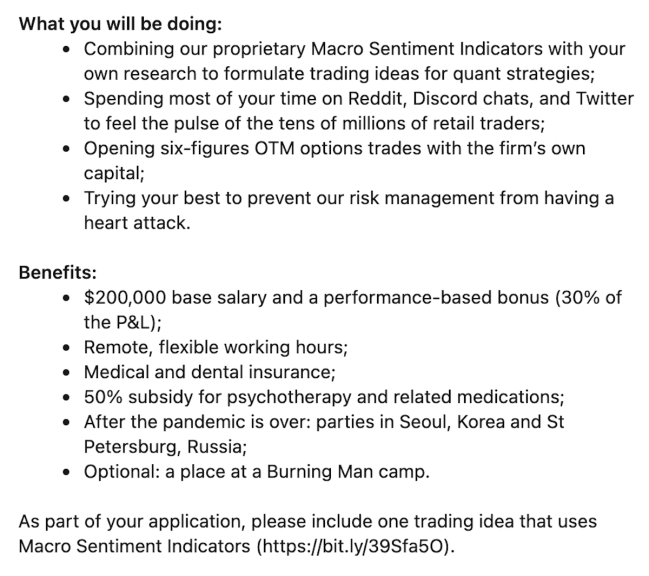