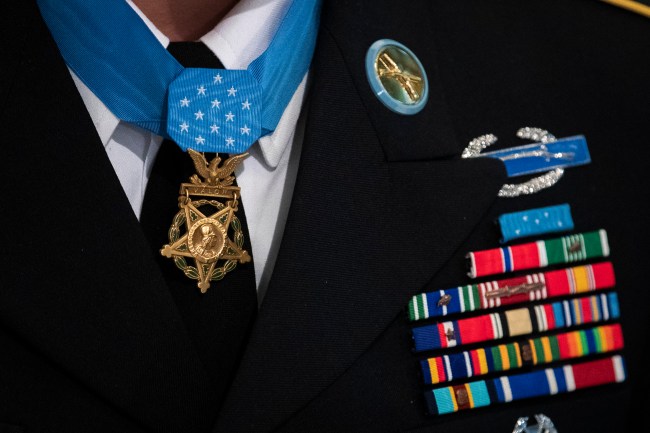 Nothing is more emasculating than knowing humans like Thomas “Patrick” Payne exist.

Payne, a Sergeant Major Ranger in the Army’s Special Operations Command, will receive the Medal of Honor in a White House ceremony on the 19th anniversary of the 9/11 attacks for his lionhearted actions during a 2015 raid, Stars & Stripes reports.

His story will raise your blood pressure, I promise.

In October 2015, The Kurdish Regional Government received a tip that 70 prisoners would soon be massacred in the town of Huwija, with aerial photos of the compound showing what appeared to be freshly dug mass graves.

American units were called in to bolster the Kurdish commandos in their operation, but things got dicey when ISIS militants began firing at Kurdish forces after their failed attempt to blast a hole in the compound’s outer wall.

Payne and his unit reportedly climbed over a wall to enter the compound and used bolt cutters to break the locks off the prison doors, releasing nearly 40 prisoners.

#BREAKING Scoop: @USArmy Ranger Sgt. Maj. Thomas Payne of @USASOCNews will receive the Medal of Honor for a 2015 Iraq raid that rescued 70 prisoners set to be executed by ISIS. President @realDonaldTrump will present the award to Payne on 9/11. https://t.co/BFUwU2fA5l pic.twitter.com/gy1TVxzwqT

The soldiers were then called to a highly fortified building on the property where Kurdish commandos were pinned down by enemy gunfire. Payne and his team scaled a ladder onto the roof of the one-story building where they exchanged gunfire with ISIS fighters, some of whom began detonating their suicide vests.

If your heart isn’t pumping hard yet, the bravery Payne put on display next will change that.

Payne moved to open another fortified door. According to the press release, he managed to cut the first lock, but due to the heavy smoke from the fire, he had to hand off the bolt cutters to an Iraqi counterpart and retreat out of the building for fresh air.

After some time, the Iraqi partner also came out for fresh air. Payne grabbed the bolt cutters and re-entered the building to cut off the last lock. Once the door was kicked opened, both American and Kurdish commandos escorted about 30 more hostages out of the burning building that was about to collapse and under enemy gunfire.

Payne reentered the building two more times to ensure every hostage was freed. One of those times he had to forcibly remove one of the hostages who had been too frightened to move during the chaotic scene, said Payne in the press release.

Sgt. Maj. Thomas Payne was initially given the Army’s second-highest award, the Distinguished Service Cross, for the 2015 Iraq raid, which freed 70 hostages held by ISIS. It's now being upgraded to the Medal of Honor. Here's helmet cam footage of the raid. https://t.co/BFUwU2fA5l pic.twitter.com/hU07Jbgkgv

Payne will likely put the U.S. military’s highest honor next to his victory trophy in 2012’s Army Best Ranger Competition. Boss moves only.