HELP, A Woman Got A ‘Kindergarten Cop’ Screening Canceled And Now I Don’t Know How To Kidnap A Child 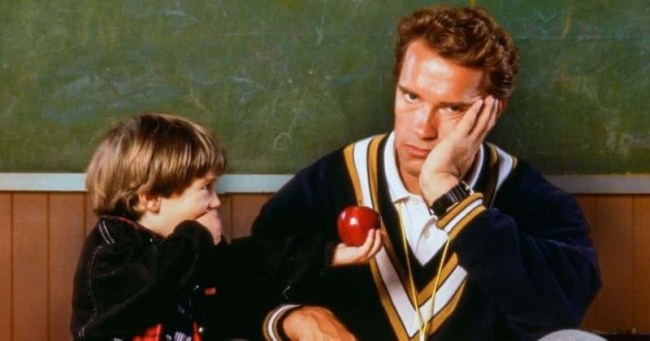 One day, in a better world, a statue of Oregon activist Lois Leveen will be erected above the rubble of hundreds of VHS tapes containing the hazardous content of the 1990 action-comedy Kindergarten Cop.

The statue shall be made as authentic as possible–made of pure, organic bullshit and with a body language signaling the unwavering desire to converse with a Cheesecake Factory manager.

Lois Leveen Day will be etched into law, immortalized, occurring annually on the very first sign of snowflakes.

Society will prosper. Tupac will be found alive and well. My ex-wife will lift the restraining order.

This societal self-actualization will be the direct byproduct of a courageous act from Leveen (who has writing credits in The New York Times and The Atlantic), who took to Twitter to condemn the illustrious Northwest Film Center for its plan to screen Kindergarten Cop to kick off its summer drive-in movie series this summer.

NWFC had the gall to plan to show the film “for its importance in Oregon filmmaking history,” as it was shot in Astoria, Oregon, but due to the obvious, self-explanatory issues with the Schwarzenegger-led comedy, Leveen led the charge to nix it.

“National reckoning on overpolicing is a weird time to revive Kindergarten Cop. IRL, we are trying to end the school-to-prison pipeline,” she tweeted. “There’s nothing entertaining about the presence of police in schools, which feeds the ‘school-to-prison’ pipeline in which African American, Latinx and other kids of color are criminalized rather than educated. Five- and 6-year-olds are handcuffed and hauled off to jail routinely in this country. And this criminalizing of children increases dramatically when cops are assigned to work in schools.”

In a message sent to WW over the weekend with the subject line “Kindergarten Cop-Out: Why Does NW Film Center Think There’s Anything Fun About Cops Traumatizing Schoolchildren,” Leveen elaborated on her concerns.

“It’s true Kindergarten Cop is only a movie. So are Birth of a Nation and Gone With the Wind, but we recognize films like those are not ‘good family fun,'” she wrote. “They are relics of how pop culture feeds racist assumptions.”

“Because despite what the movie shows,” she continued, “in reality, schools don’t transform cops. Cops transform schools, and in an extremely detrimental way.” [Williamette Week]

It is clear that Ms. Leveen, though undeniably a hero, has never seen Kindergarten Cop. Because no right-minded person who’s seen the film would dare to compare it to a film that presents the Ku Klux Klan as a heroic force necessary to preserve American values. It just would not happen.

In addition to its glamorisation of the police, “Kindergarten Cop” is a vehicle for transphobic hate speech.

Pressure from Leveen caused the Northwest Film Center to pivot from the comedy to a second screening of Good Trouble, a documentary on recently deceased civil rights icon John Lewis. Good family fun.