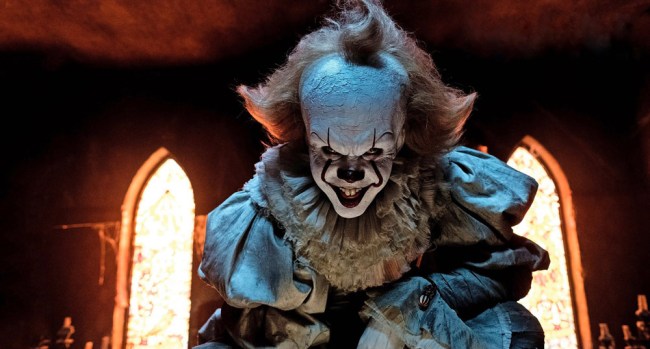 Poor Georgie. It sucks that after all he went through in IT, he died of mesothelioma from being exposed to carcinogens in that sewer. Turns out, he needed the law offices of James Sokolove more than he needed his rugrat friends going on a crusade to rescue him.  For those of you who believed that statement, let this be a lesson to you: never read posts about a movie prior to watching it yourself. That’s like reading Steven Avery’s trial notes before watching Making A Murderer.

I take it I’ve lost all those folks who have preemptively clicked on this post before seeing the movie, and only the sane people remaining. God, what’s with those people?

Anyway, it should be of no surprise to you when I recall the opening scene of the movie when little Georgie is playing with his boat before it slips down a storm drain, only to be surprised by Pennywise lurking in the sewer. Georgie then suffers a gruesome fate when Pennywise severs off his arm and drags him into the sewer.

Well, in a deleted scene shared on Twitter, Georgie experiences a much happier fate, and the incident in which the entire plot of the movie hinges on vanishes.

The people who made IT (2017) actually made a joke version of the Pennywise/Georgie scene. I don't think I've ever heard of a film doing a joke version of a scene and actually keeping it as a deleted scene. pic.twitter.com/RQhoHhFwiU

This wasn’t a scene created by a fan to parody the movie, but an actual scene filmed with the actual cast and crew. It’s not sure why the comedic scene was even filmed–nevermind kept–in the first place. One fan claims that it could have been used to put Jack Grazer (Georgie) at ease before shooting the actual gruesome scene.

I heard that Bill Skarsgård hated scaring the kids without their consent. I think they filmed this scene to assure the young actor playing Georgie that Mr. Skarsgard is a professional actor who wouldn't hurt him. God Bless Bill.

Whatever the case may be, this deleted scene is a hell of a lot lighter than the this one.