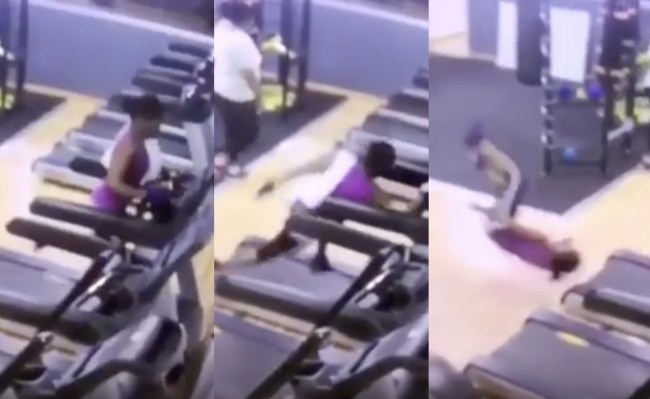 It’s a new year and a lot of people are re-dedicating themselves to hitting the gym (hard) and getting fit. This is a great thing.

I was watching the TODAY Show early this morning as I was getting ready for work and looked up just in time see TODAY anchor Craig Melvin laughing to hard there were tears in his eyes. I’d missed the original clip but thankfully this was on my TV with the DVR box so I was able to rewind. Next thing I knew, I’m laughing just as hard as Craig.

It’s unclear what happened here with the runner’s pants but it’s fairly obvious this entire debacle was caused by a wardrobe malfunction of some sort. I’m guessing they’ve been shredding away the pounds in the new year and those pants aren’t as tight as they used to be and that’s what caused the slip. Regardless, I’m impressed by their perseverance here.

If I busted ass, fell flat on my face, and was vaulted across the room by a treadmill I’m pretty sure I wouldn’t have gotten straight back on the machine. But this person was determined. They got knocked down but they got up again.

Remember when I was talking about TODAY Show anchor Craig Melvin laughing so hard he was crying? Here’s that clip of him losing it on TV this morning so you have some context on that.

This woman at the gym sums up how all our #NewYears resolutions are going #DalyClick pic.twitter.com/dllyOTQB0K

Much love to this person for letting the gym release that footage. There have been plenty of times in life when I’ve taken myself too seriously only to realize that the ability to laugh at yourself is always going to lead to a happier life.