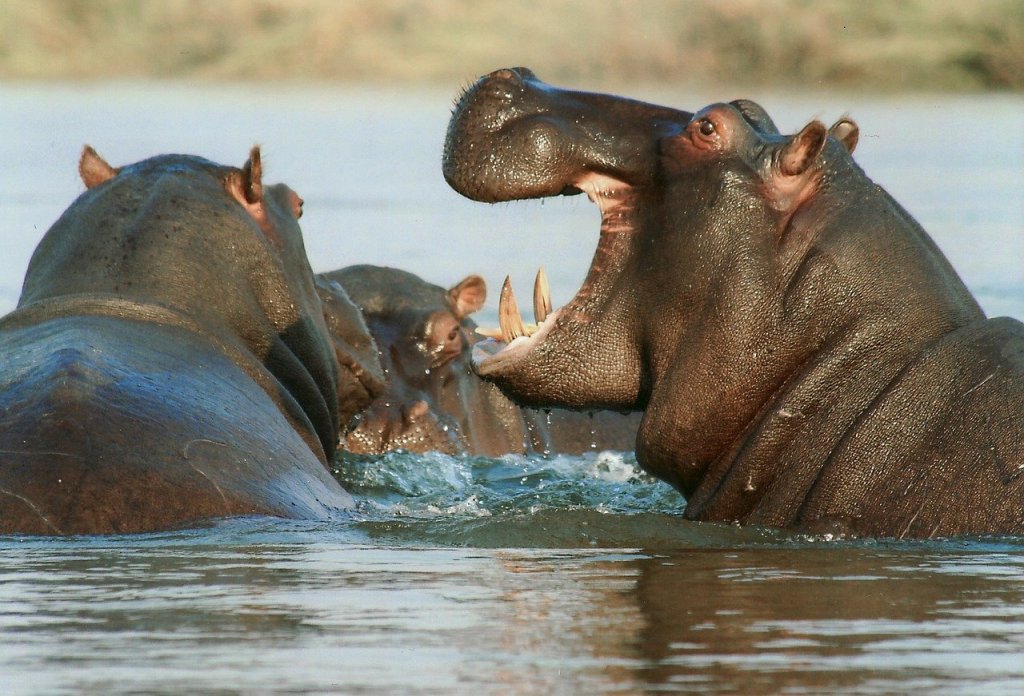 It feels like 80% of everything I know about Hippos I learned from the movie Congo with Tim Curry and Laura Linney based on the Michael Crichton novel. They called out the hippopotamus as the deadliest animal in Africa and that stuck with me for most of my life.

This clip of a rampaging Hippo appears to have gone viral over the past few days. We see an angry Hippo chasing a speeding boat while a tourist films the enormous animal in hot pursuit.

The video’s caption on YouTube reads that 27-year-old Dicken Muchena and three friends were involved in the high-speed Hippo chase. It states this took place last Friday. I had to double-check YouTube because the video looked familiar but what I discovered is angry Hippos love chasing boats and terrifying people.

There are multiple clips throughout the years of Hippos swimming SO MUCH FASTER than they should be able to. A fully-grown adult male weighs between 3,300 and 4,000 pounds and the female Hippos weigh 2,900 to 3,300 pounds. There’s absolutely no reason an animal that large that has four legs to walk on land should be able to swim as fast as boats. It’s not fair to the rest of the Animal Kingdom.

What typically sets off the Hippopotamus is how territorial they are. They don’t like people up in their business and they’ll attack anyone that gets too close.

Also, they excrete something called ‘blood sweat’ which is one of the more terrifying facts about Hippos. They have special skin glands that releases the oily and reddish substance. It acts as a natural sunscreen and lotion for Hippos and is apparently great for their skin. They excrete Blood Sweat and they can catch a boat!

According to the Daily Mail, this is the second time in just six months that Dicken Muchena has been chased by Hippos. The 27-year-old Geography teacher was also chased at the Masai Mara Game Reserve in Kenya back in December.

This incident took place on Lake Victoria in Kenya. Hippos are unpredictable by nature. Sometimes they’ll allow tourists to get close to film them. Other times they’ll pop out of the lake and chase a speeding boat. They are also capable of running up to 30 KM/HR on land.

I mentioned before that there are many videos on YouTube of Hippos chasing boats so I figured I would throw in a few more here for good measure.

The historical range of Hippos is pretty much the lower two-thirds of the African continent but their modern range is much smaller. They are still spread out across most of Africa but relatively easy to track down on a safari. There’s also a famously ongoing Hippo crisis in Colombia that is Pablo Escobar’s modern legacy.