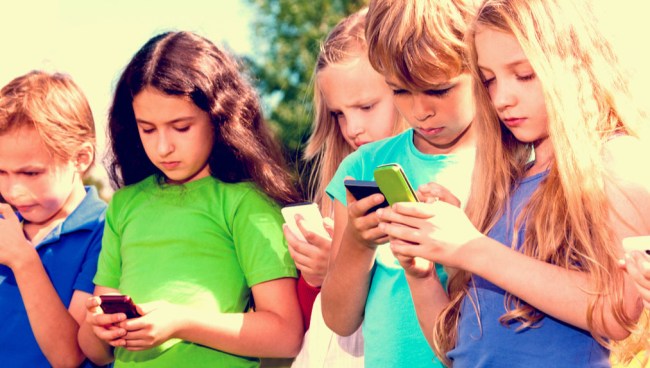 A survey of 1,000 kids aged 8-14 and their parents discovered that the average child’s smart phone habits are usually far less than ideal.

The survey took a look at several ways kids use smartphones these days and determined their average use of a number of things such as how many texts do they send, how many WhatsApp messages they send, how much they use video chat, as well as how much time they spend browsing social media.

In a not-so-shocking turn of events, the results of the study were not great. In fact, they were pretty darn mind-boggling.

By the age of 14 the average child will have sent more than 35,000 texts, 30,000 WhatsApp messages and racked up more than three solid weeks of video chat, a new study has revealed.

The modern youngster will also have spent the equivalent of six months looking at their phone during that period, averaging 135 minutes’ use a day.

The survey of 1,000 kids aged 8-14 and their parents, also found young people spend over an hour a day browsing social media sites like Facebook, Snapchat and Instagram

It also emerged they expect to receive a reply to a message within 15 minutes.

Monqi, makers of a new smartphone for kids who commissioned the research, also discovered that, on average, kids receive their first smartphone at the age of 10 and that six in 10 under-14s said their phone is the first thing they check in the morning and last thing at night.

The most common argument kids have with parents about mobile phones is the amount of time spent using it, followed by the times it’s used – either too early in the morning or late at night.

However, that’s a little like the pot calling the kettle black because of the adults polled in the same survey, nearly four in 10 said they themselves spend too long each day, an average of 124 minutes – or just ten minutes less than the kids, looking at their smartphone.

Psychologist Dr. Becky Spelman says not too worry too much though.

“The survey found that children invest a great amount of importance in the ability to stay connected – checking their smartphones before bed and as soon as they wake in the morning.

“Some parents may be alarmed by this, comparing their children’s experiences to their own childhood when technology was not as prevalent.

“Panic is not the solution, nor is denial. It is inevitable that your child will use technology, so it’s your job to help them navigate the digital waters safely, and set boundaries.

“The survey also found that there are benefits to kids having a smartphone – parents can track their child’s location and have peace of mind knowing that they can be contacted if a problem arises.

“This gives the youngster a new found independence – which is so important in an age of cotton-wool-parenting.”

Below are the top 10 smartphone worries parents reported having…

1. Kids accessing inappropriate content
2. Children may be targeted by strangers
3. Cyber-bullying
4. Receiving nasty messages
5. They’ll be on the phones too late into the night, disturbing their sleep
6. Worried kids will drop/break phone
7. Will be glued to the phone and stop listening
8. Kids not concentrating in class
9. Bullying about handset
10. Phone will get stolen

All of those seem pretty legit to me. What do you think?