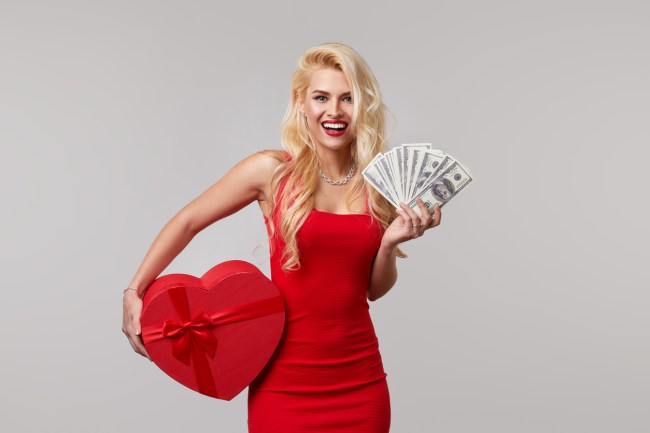 You had better hide this article from your girlfriend if you have been dating for less than six months. You only have days until Valentine’s Day, and according to a new survey, you may have to organize a casino heist in order to afford a V-Day gift for your favorite gal.

Bankrate conducted a survey of 1,485 Americans with significant others, and inquired about their spending expectations for Valentine’s Day on everything from gifts, chocolates, and dinner. Some Casanovas are going to be breaking the bank to finance their romantic endeavors.

On average, 70 percent of people polled said that they planned to spend money on their partner this Valentine’s Day. The average spent will be $152, with millennials spending the most, splurging $208 on February 14th. Gen-Xers will drop $160 on their V-Day date, Boomers will spend $101, and the silent generation has given up on love, spending only $43.

But the big spenders on Valentine’s Day are people who are still under the spell of a new romance. Romeos and Juliets who have been together for less than six months are expected to spend an incredible $700 on their lovey-dovey for Valentine’s Day. You could go on a cruise for that price, probably two cruises if the ship has a possibility of being quarantined for coronavirus.

For lovebirds in relationships of six months to two years, V-Day spending drops to $453. The love wears off for couples who have been together for two years to five years, and they’ll $157 on the lovers’ holiday.

All together, Valentine’s Day spending will reach a whopping all-time high of $27.4 billion, up 32 percent from last year’s projections, according to the National Retail Federation.

Remember kids, Valentine’s Day is only one day, you’re getting ripped off with those “special” prix fixe Valentine’s Day menus at restaurants, the price of flowers are super inflated the week of February 14, and just buy your chocolate the next week when its 70 percent off.