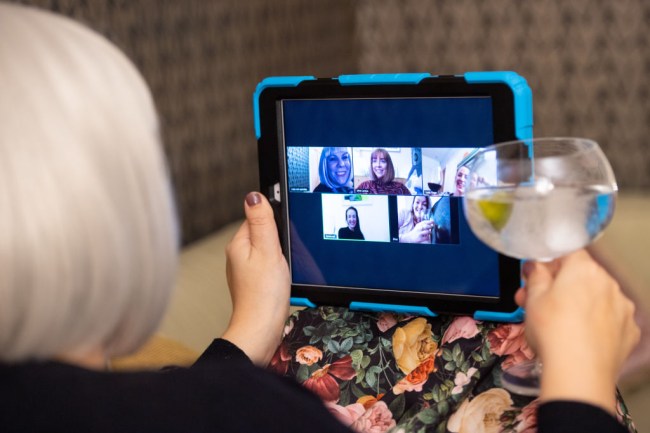 Before the entire world stopped functioning as it usually does, I did not know what Zoom was.

However, that was about a month ago when things were relatively normal and we could do things like go outside without a hazmat suit on. Now, like most people, I’m very familiar with Zoom.

It’s early, but I think if we were to take a glance at the current MVP race concerning the things that have recently stepped up in the clutch, it’d look something like this:

Zoom has been huge for those of us working from home but has also proved beneficial in other areas, like allowing podcasters to keep recording episodes, ensuring celebrities and entertainers can keep people amused, permitting late-night shows to have guests on, making sure people in school can still attend classes, and helping bands find ways to still rehearse despite being confined to their separate homes.

Katie Nolan of ESPN may have taken an early lead in the Best and Most Entertaining Use of Zoom when she challenged the guests on her show to get the most famous person they could get to come on a chat. Shea Serrano was able to pull out Lin-Manuel Miranda. Not bad, Shea. Not bad at all.

There is another reason why Zoom has been so clutch recently: it has allowed people to stay in contact with their family members. Birthdays are still happening, folks. Same with anniversaries, religious celebrations, and, soon enough, graduations.

Zoom has helped make these things happen the best the company can under the current truly bizarre circumstances. With that said, it isn’t without its pitfalls.

It’s on the internet, so there’s obviously been hacking issues—most notably the new phenomenon of “Zoombombing.” Basically, assholes burst into Zoom calls and pepper attendees with hate speech and graphic images.

Awesome. This is why we can’t have nice things, people.

In Zoom’s defense, it didn’t really expect the service to become so popular in such a short period of time. In December, the company had 10 million daily users but that number had ballooned to 200 million by the end of March.

Here’s what CEO Eric Yuan had to say:

“We did not design the product with the foresight that, in a matter of weeks, every person in the world would suddenly be working, studying, and socializing from home.

We now have a much broader set of users who are utilizing our product in a myriad of unexpected ways, presenting us with challenges we did not anticipate when the platform was conceived.”

That’s fair. Hackers gonna hack. But still, you’ve got to tighten it up.

Security issues aside, another problem with Zoom has been a much more complicated one that hits much closer to home: parents—specifically technologically-challenged ones.

They’re still trying to figure out Facebook and they’ve been on that damn thing for over five years now. Asking them to figure out something like Zoom on the fly is a little too much of an ask.

As the child of borderline technophobes, I’ve decided to assist anyone dealing with the problems I’ve encountered because we’re all looking to find ways to help out during these trying times,

So, here are some tips for Zooming with your folks.

Tip 1: Know When To Not Even Try

Have you FaceTimed with them before? Was it a trainwreck? Did you spend two minutes staring into their ear? If so, don’t even bother with Zoom.

I’m serious. Write letters or something. No one likes to admit they’ve been beaten but some battles are simply not worth the fight.

Tip 2: Clearly Explain What Zoom Is Before Hand

In some ways, parents are both the best at being careful on the internet and the worst. It’s actually kind of amazing.

At first, they’re great at protecting themselves because they don’t trust the damn thing and definitely don’t trust anything new. Take my father-in-law. He’s still using AOL because he’s always used AOL, and unless AOL does something like start talking shit about the Jersey Shore, he’ll use AOL for the foreseeable future.

On the flip side, once parents feel comfortable with the Internet, all bets are off.

Without having to look, I’d imagine that my mom has at least 37 websites open on her phone right now. That lady loves to click on things. She’s probably clicking on something right now.

What’s wild, though, is that she’s probably seen something about Zoombombing in her internet travels so she might be skeptical when it comes to using it. She’ll click on every damn Facebook link there is but won’t accept a Zoom invite from her only son.

In both cases, whether it’s my father-in-law or Ma Dukes, Zoom needs to be very well explained—what it is, what it does, how it works, and assurances it won’t use up all of their data as long as they connect to WiFi.

You’re going to really want to explain the data part to them. Parents are obsessed with their data usage.

Tip 3: Make Sure The Camera On Their Computer Works

It should be as easy as telling them to go to their settings but it is never, ever as simple as that.

If I had to guess, roughly two out of every five parents have a computer whose camera isn’t working for some reason. It used to work. You set it up and it worked then but it inexplicably doesn’t anymore.

Don’t waste time trying to figure out how it got shut off. Instead, focus your efforts on getting it back up and running. This is, of course, a little tricky when you’re not physically there but you’re going to have to get over that hurdle.

Everyone is dealing with challenges right now. Join the club. Just go into things with a plan. Make a step-by-step guide ahead of time that can’t possibly be misunderstood. Sure, there’s a chance they’ll somehow manage to brick their computer anyway while trying it but that just comes with the territory.

This is definitely an important step when explaining the whole Zoom process. The last thing you want is for them to get all set up on the deck or something and have the sun behind them. That’s how you end up Zooming with a couple of black shadows like your parents are FBI informants sitting down for a documentary about the case.

When it comes to the sun, tell them they need to face it like you’re facing the tough decision as to whether or not you should cut your own hair right now.

The level of their computer is also important because no one wants to look up someone else’s nose. Seriously, no one wants to. Nose doctors probably don’t even want to. They wanted to be a cooler doctor but took a wrong turn at doctor school and there they are.

Well, you definitely don’t want them walking around the house with their laptop in their hands so they can show you the closet they just painted. That’s bound to end up in some kind of disaster.

The same goes for them getting too excited about doing a virtual family happy hour. Just raise the glass. Don’t tap it against the screen. Just raise it. It totally gets the job done.

Tip 5: Know When To Shut It Down

I haven’t seen exact figures but I’d have to think that it’s commonly agreed upon that 45 minutes is the longest a Zoom chat with parents needs to go. Anything longer than that feels unnecessary.

It’s not like you don’t want to talk to your parents more, and if this were a world where we could meet up and hang out with them in person, that’d be a different story. Shit, if these were the good old days, you could spend forever with them.

Sadly, this is not the good old days.

Back in the day (like, a month ago), you could hang out with your lovely parents without having to sit in one place the whole time. Now, if you’re Zoomin’ with them, you’re pretty much stuck in one spot. That’s tough.

I personally have the attention span of a baby monkey after three cups of high-octane coffee. I’m not good at sitting still, so this is a challenge for me. I start to fidget and squirm to a point where I look like my daughter when she has to go to the bathroom. It’s not pretty.

And everyone’s drink is done. Let’s just wrap this up and end on a good note, OK?

You need to be careful, though, because odds are your parents are in it for the long haul. They’re not looking to go anywhere so you need to tread lightly, being both tactful and mindful of the situation.

What I’m saying is you need to make up an excuse for why you have to go. Your laptop is going to die. You need to get dinner going. Your kid found your chainsaw. You want to get back to Tiger King because you think you discovered a clue pertaining to Carol’s missing husband.

You can also shoot for the moon and say your laptop is going to die and you also need to have your kid help with dinner to distract them because they just figured out how to turn the chainsaw on.

Whatever it takes, do it—as long as you do it tenderly. After all, they are your parents.

Tip 6: Promise To Do It Again, But Don’t Say When

A part of bowing out gracefully is saying, “Yeah, we’ll totally do this again.” Your parents will ask you when. Don’t say when. Don’t tie yourself down. Just say that you’ll figure something out and do it again soon.

“Soon” being the operative word there.

After all, you don’t want to get bogged down with commitments at a time like this. Why? Well, I guess there’s not a ton of other stuff to do but I like the open-endedness of everything.