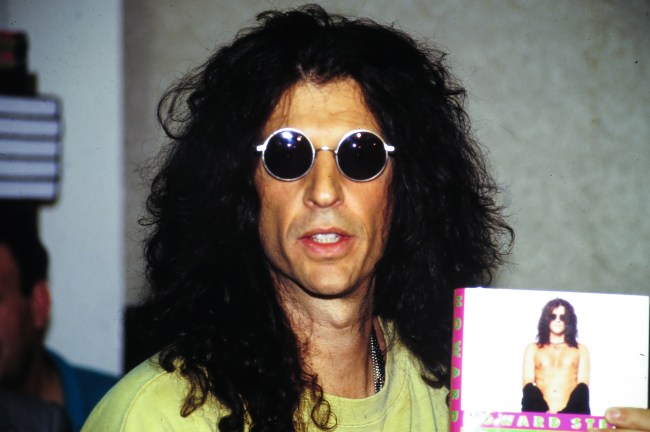 Gone are the days of Howard Stern using strippers’ butt cheeks as bongos and funding girls’ breast implant surgery. The 65-year-old radio icon claims that every one of his interviews he conducted during his pre-satellite radio days makes his sick and he can’t think of his two best-selling books, Private Parts (1993) and Miss America (1995) without cringing at his excessive narcissism.

Stern takes pride in his evolution, much to the chagrin of former co-host Artie Lange, who has consistently claimed that the former shock jock has gone “soft” and lost anti-establishment edge that prompted 20 million listeners to tune into The Howard Stern Show weekly.

The legend recently sat down with The Hollywood Reporter in the lead up to the release of his first book in nearly 25 years, titled Howard Stern Comes Again (out May 14), and spoke about everything from how a cancer scare forced him off the air to how his “dinner party approach” of interviewing feels better to him now than his method for years of “bashing someone in the face with a sledgehammer.”

To highlight this evolution, the America’s Got Talent judge recalled an interview he did with Gwyneth Paltrow in which he got her to be candid through conversation rather than interrogation.

He points to an early 2015 interview with Gwyneth Paltrow that weaved its way from a discussion of relationships to one of oral sex as a major turning point. “Had I said to her, ‘Gwyneth Paltrow, do you blow your husband?’ I’m an asshole,” he says. “But, sure enough, we start talking, and she’s fascinating, and I’m getting to know her, and then she goes: ‘One of the things you can do to make your man happy, ladies, is, like, sometimes in the middle of a fight, I just blow him. It ends everything.’ So, she took me there.”

On the flip side, Stern points to an interview he conducted with Robin Williams when he was younger that he deems is one of his biggest regrets on the job.

An early ’90s interview he did with Robin Williams still ranks among Stern’s biggest regrets, however, in part because it’s too late to apologize, as he has to others. “I loved Robin Williams, but there I am beating him over the head with, like, ‘Hey, I hear you’re fucking your nanny?’ I could have had a great conversation, but I’m playing to the audience,” he says. “They want to hear outrageousness, and that’s my arrogance thinking that Robin Williams can’t entertain my audience. How stupid am I?”

As far as favorite interviews of all-time go, Stern has hundreds to choose from–from Donald Trump to Paul McCartney. His favorite: Conan O’Brien.

For nearly two months Stern Show fans have been guessing at whom Howard named as his best interview of all time within the pages of his new book Howard Stern Comes Again. On Wednesday morning, the world finally found out that person was none other than Conan O’Brien! Conan told Howard he felt a similar connection to him following their sit-down together even after leaving the studio.

“Then, I was in New York and I was walking around and people were coming up to me on the street and telling me how much that meant to them,” Conan told Howard. “I never stop hearing about that interview.” [via Howard Stern.com]

The interview, from 2015, was incredible. Conan opened up about battling depression, which he treats with therapy and medication, his time as a writer on Saturday Night Live, and a bit he did at Harvard that Stern deems one of the greatest comedy bits of all-time. Listen below.

Here is a 19-year-old Conan presenting the biggest comedian on the planet with a fake award him and his college buddies commemorated with a bowling trophy.

Conan and his fellow Harvard Lampoon writers prank Bill Cosby with a fake award back in the 80's. pic.twitter.com/7Ahua6n12I