HQ Trivia Announces A $250K Jackpot In Biggest Game Ever 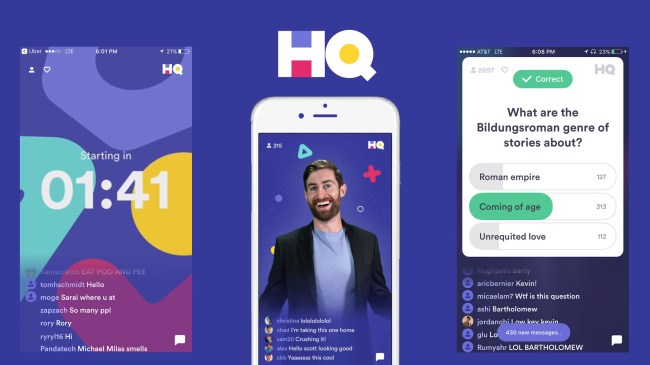 I recently sat down for a family dinner with my aunt + cousins and the wine started flowing. Before I knew it the time struck 9pm and I got my push notification for HQ Trivia so I busted out my phone to play assuming that everyone at the table knew what was going down. I was legitimately shocked to find that nobody at the table had heard of HQ Trivia.

Everyone in my world seems to 1) know all about HQ Trivia, 2) played religiously for weeks, and 3) gave up because the prizes weren’t high enough to justify logging in 2x daily to win fifty cents. I was at dinner a couple of weeks ago in Union Square and at 9pm I looked around and I shit you not when I say that 50% of the tables in this restaurant had people with their phones out playing HQ Trivia. It’s a cultural phenomenon, and it’s about to take the step to the next level thanks to a reportedly HUGE deal with Warner Bros.

AdAge is reporting that HQ Trivia signed a deal with Warner Bros. worth $3 million. The deal allegedly includes sponsorships for three Warner Bros. movies, the first of which is Ready Player One, and it goes on to say that host Scott Rogowsky will announce Wednesday’s game will have a prize pool of $250K (which he did on Sunday night). The sponsorship will include callouts of the movie and questions tangentially related to the film (native advertising).

The app raised $15 million back in February but this is the first blockbuster ad deal for HQ Trivia that has had details make it to the public. This is also an incredibly natural fit for both Warner Bros. and HQ Trivia. The similarities between HQ Trivia and Ready Player One are obvious.

$250,000 will be BY FAR the largest prize pool in HQ Trivia history. The previous high (until last night) was $50K after a $25K prize pool rolled over a week. Last night, HQ Trivia had a $100K prize pool thanks to a Nike Air sponsorship.

At its peak, HQ Trivia has had over 2.18 million concurrent players. I’d be SHOCKED if HQ Trivia doesn’t crack 3.5 million players with a $250,000 prize pool. I wouldn’t at all be surprised to see that number eclipse 4 million. And 6 months from now I fully expect regular numbers near 5 million concurrent players if they continue to land massive ad deals like this with enormous prizes.