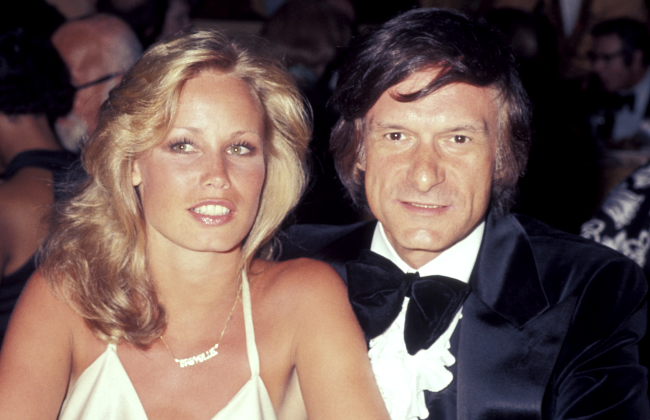 Last week, one of Hefner’s former girlfriends, Holly Madison, compared living at the Playboy Mansion to being in a cult.

This week, in another preview video from the 10 part documentary series and in an interview with the New York Post, Hugh Hefner’s former girlfriend Sondra Theodore, went even further.

“He groomed me and twisted my mind into thinking his way was normal,” she said. “He introduced me to drugs. I’d never had a drink or a drug before going up to the Playboy Mansion. And my first night there I was handed champagne and the drugs came later, and I was underage.”

One night, she says, she caught Hefner engaged in a sexual act with her dog.

“I walked in on him with my dog and I said, ‘What are you doing?’ I was shocked,” she said. “He made it seem like it was just a one-time thing, and that he was just goofing off. But I never left him alone with my dog again.”

Theodore claims that the reason so many people like her were kept silent for so long was because, prior to his death, Hefner had things “in place to protect himself” including a stack of videos taken without visitors to the Mansion’s consent.

And in the series, ex-members of the nudie mag magnate’s inner circle claim he’d outfitted his mansion with hidden cameras to record Playmates, bunnies, celebrities, law enforcers and members of the media engaging in sexually explicit and depraved acts for years. He’d allegedly threaten to leak the damaging clips if and when anyone attempted to out him for misconduct.

However, Theodore and former director of Playboy promotions Miki Garcia have spent the last decade tirelessly fighting to put an end to Hefner’s blackmail.

Hefner’s former butler also backed up Theodore and Garcia’s claims about the videos, saying Hefner “recorded celebs and athletes having sex with other women in his bedroom, and with these sexual tapes came power.”

Another allegation that has been revealed thanks to the upcoming documentary series is that Hugh Hefner would have what he called “pig nights” or “pig parties” on a weekly basis.

On those nights, according to Theodore, Hefner would have “two pimps bringing in carloads of prostitutes from Sunset Boulevard.”

They would then allegedly have a dinner party with these very young girls for celebrities, athletes and other VIPs which would serve “as a jumping-off point for sex parties.”

Playmate Brande Roderick, however, defended Hugh Hefner during a recent appearance on Banfield.

“Hef was a wonderful person,” said Roderick. “They were all there of their free will. No one was holding a gun to their head.”

Roderick was also Hugh Hefner’s girlfriend for a year in 2000 and was named Playmate of the Year in 2001.

“Oh wow, they went down to Sunset Boulevard to pick up girls? Are you kidding me, that’s what everybody does. Guys go to bars to pick up girls. They’ve been drinking forever. That’s what people do when they go out.”

Roderick added, “I feel so sad that I even have to defend him because he was such an amazing person who has done so much for so many people.”