Holly Madison Says Living In Playboy Mansion Was Gross, Like A Cult 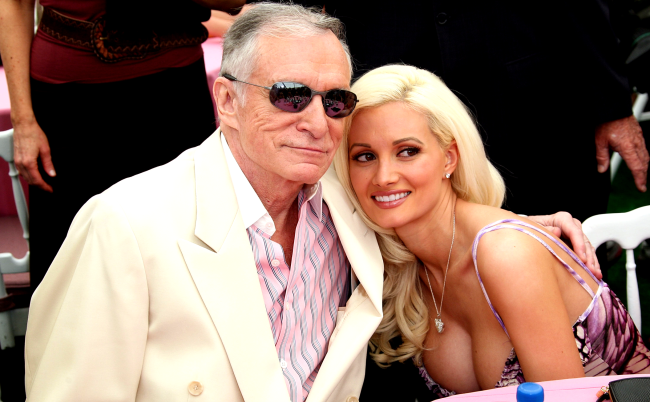 Former Playboy model Holly Madison is exposing what she says living in the Playboy Mansion with Hugh Hefner was really like back in the 2000s.

Madison lived in the mansion with Hefner as his girlfriend beginning in August of 2001. Playboy models Bridget Marquardt and Kendra Wilkinson eventually joined them in the relationship and starred together in the E! reality show Girls Next Door. In October 2008, Madison announced she had ended her relationship with Hefner.

While Madison was with Hefner she publicly stated that she wanted to marry him and have his children. However, in 2021, Madison told the Call Her Daddy podcast, “Looking back at it, it was a very Stockholm syndrome kind of thing.”

Now, in the upcoming A&E documentary series Secrets of Playboy, Holly Madison is spilling even more tea about her time in the Playboy Mansion with Hef, comparing it to a cult.

“The reason I think the mansion was very cult-like, looking back on it, is because we were all kind of gaslit and expected to think of Hef as, like, this really good guy,” Holly Madison, 41, recalled. “You started to feel like, ‘Oh, he’s not what they say in the media — he’s just a nice man.'”

Madison added, “Another thing that reminds me of a cult is how it was so easy to get isolated from the outside world there. You had a 9:00 curfew, you were encouraged to not have friends over. You weren’t really allowed to leave unless it was, like, a family holiday.”

Hefner also, according to Madison, made her give up her job as a waitress.

“He said it made him jealous, and he would appreciate it if I quit my job,” said Madison. “So, instead, we were given $1,000 a week as an allowance.”

Related: Playboy Mansion Parties Had So Many Drugs That A Poodle Allegedly Got Addicted To Cocaine

In another clip from Secrets of Playboy, Madison talked about she tried to rebel against Hefner by cutting her hair short.

“I felt like I was in the cycle of gross things and I didn’t know what to do,” she said.

“I got to a point, not too far into my time there — I think it was, like, six months in — where I kind of broke under that pressure being made to feel I had to look like everyone else,” she revealed.

“My hair was really long, naturally, and I was just like, ‘I’m going to go chop my hair off so I can at least look a little different,'” she continued. “I came back with short hair and he flipped out on me and he was screaming at me and said it made me look old, hard and cheap.”

According to Madison, her first encounter with Hefner was also traumatic.

She had been invited to go clubbing with Hugh Hefner and was hoping to be invited to live in the Playboy Mansion.

“I didn’t really know what went on with them sexually,” she told the Power: Hugh Hefner podcast in December. “I knew there must be something and I was prepared for that. I wasn’t prepared for what would eventually happen.”

She was invited back to the mansion that night where she and Hefner had sex.

“I wasn’t necessarily expecting to have sex that night,” she said. “I thought it would be more of a first date – even though obviously it’s not a very traditional first date. I thought it would be more the type of thing where I saw what happened, saw what was going on. If I wasn’t comfortable with it, I wouldn’t have to do anything and I could make my decision on whether I wanted to come back for date number two or not.”

Madison said she “definitely was not expecting to be the first one to go that night, but I was wasted. He was literally pushed on top of me. And after it happened, I was just mortified and embarrassed and it had way more of an emotional impact on me than I thought it would.”

The next morning, however, Madison asked Hefner if she could move into the mansion and he said yes.

“I felt like, ‘There’s no taking that back so I might as well get what I came for,” she said. “I felt like by moving myself in and getting what I wanted from the situation, that was demanding respect in a way. I felt like if I didn’t do that I was just going to be haunted by the experience.”

The 10 hour Secrets of Playboy docuseries begins airing on Jan. 24 on A&E.