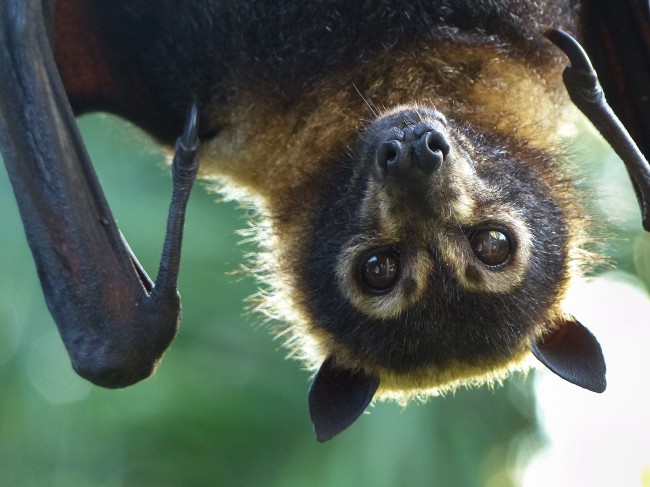 There are very few species on this planet as physically revolting as bats, and God’s most ruthless prank on humanity was saturated earth with these ungodly beasts.

Bats make up about 20% of all classified mammal species worldwide, with over 1,400 species, none more haunting than the golden-crowned flying fox.

The world’s largest bat, which is native to the Philippines and has a wingspan wingspan up to 5-feet-6 inches long and a weight of up to 2.6 pounds, has gone mega viral this week after a Twitter user posted a photo of the nightmarish monster hanging upside down.

Remember when I told y'all about the Philippines having human-sized bats? Yeah, this was what I was talking about pic.twitter.com/nTVIMzidbC

I prayed with every fiber of my being that this was a photoshop. A hoax.

I am saddened to announce that these creatures are real and they are taller than Tom Cruise.

There are smaller ones hanging around trees and sometimes under roof eaves of some houses back in the provinces, these bigger ones hang around taller trees (but we rarely see them), at least the ones near our old house but last time I saw one in person was almost five years ago.

This bat has a face that looks very similar to that of a fox. They have a long snout that is very similar to those of canines. They also have ears that are pointed rather than round like most species of bats. Many people call them the Fox with Wings.

yall the 5.58 ft means like this. not the bats height itself pic.twitter.com/AV3hgAW3VB

^ This brings me no comfort.

According to Wikipedia, deforestation and poaching for bushmeat (an important food source for the underprivileged in rural areas), the golden-crowned flying fox is an endangered species.

I wouldn’t wish the extinction on any species on this planet, but these suckers are questioning my ethical limits.