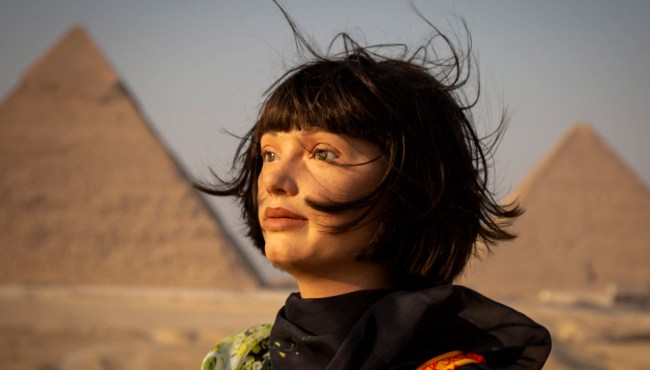 For the first time in thousands of years, a contemporary art exhibit was held at the Great Pyramid of Giza. This historic display featured the works of some of today’s top artists, as well as one that is not of the human kind, Ai-Da, a humanoid robot.

Ai-Da, the world’s first ultra-realistic robot artist, has been sharing its art with the world since 2019. It has even given a TEDx talk in Oxford called “The Intersection of Art and AI” in February 2020.

None of that mattered though when Aidan Meller, who created Ai-Da along with Engineered Arts and the University of Oxford, attempted to bring the robot into Egypt for the art show.

In what has to be a first, Ai-Da was detained at customs in Egypt over concerns that the robot is a spy.

Related: Superhuman Robots Are Coming Very Soon, Says Expert: We ‘Will Have To Be Vigilant’

“The British ambassador has been working through the night to get Ai-Da released, but we’re right up to the wire now,” said Meller shortly before the robot’s release, reported The Guardian. “It’s really stressful.”

Meller said border guards detained Ai-Da, and its sculpture, for 10 days because it had modems in its framework and cameras in its eyes.

“I can ditch the modems, but I can’t really gouge her eyes out,” said Meller.

Ai-Da and its sculpture were eventually able to clear customs, just hours before the art exhibition at the Great Pyramid of Giza was set to begin.

The robot’s piece of art is a play on the riddle of the sphinx: “What goes on four feet in the morning, two feet at noon, and three feet in the evening?”

“Four legs is when you’re a toddler, two legs is when you’re an adult, and three is when you’re elderly and need a walking stick,” Meller explained. “So Ai-Da produced an enormous version of herself with three legs. We’re saying that actually, with the new Crispr technology coming through, and the way we can do gene-editing today, life extension is actually very likely. The ancient Egyptians were doing exactly the same thing with mummification. Humans haven’t changed: we still have the desire to live for ever. But all of that comes to nought if we can’t get her released.”

Related: Now Scientists Have Created A Flying Robot That Can Ride A Skateboard, Balance On A Slackline

Meller added, “She is an artist robot, let’s be really clear about this. She is not a spy. People fear robots, I understand that. But the whole situation is ironic, because the goal of Ai-Da was to highlight and warn of the abuse of technological development, and she’s being held because she is technology. Ai-Da would appreciate that irony, I think.”

He continued, “We’re well aware that the fictions of 1984 and Brave New World are now facts. AI is developing rapidly. For the first time tens of thousands of graduates will have degrees in machine learning. The supercomputer can use vast data and process extraordinary algorithms. We predict by 2025 there will be big disruption with technology, and Ai-Da is trying to use art to bring attention to that.”

Welcome to the future.