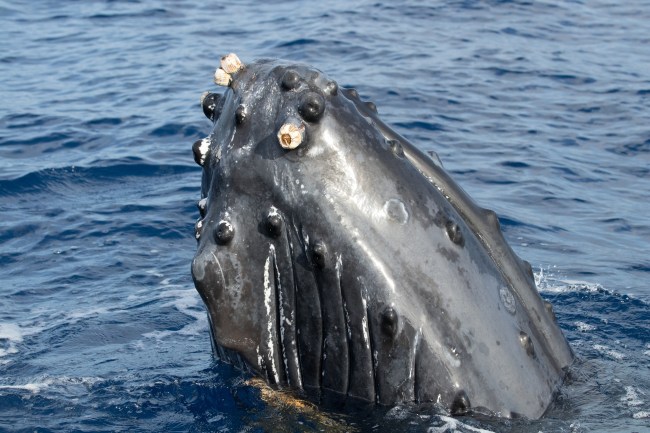 Whales are cruising down the coast of California right now. As colder air from the northern Pacific pushes its way southward, these whales are hugging the coastline in search of an easy meal as huge schools of baitfish congregate just off the beach.

Some kayakers and paddleboarders in Avila Beach of San Luis Obispo, California were tracking whale activity when two kayakers nearly got swallowed up by a massive humpback whale like Geppetto and Pinocchio. At least I think that’s how it happened. I haven’t watched that movie since I was barely a toddler.

There are birds everywhere, fish on the surface, whales feeding all over, kayakers chilling out, and BOOM the enormous humpback whale pops up with the kayak in its mouth. Whereas a fraction of a second earlier they were chilling and probably having one of the best days of their lives, the kayakers were then thrown into the water in a panic. It’s wild to watch this all unfold so quickly.

The footage is making the rounds via Facebook but it looks like someoen took that video private so I’ve included the YouTube video as well as the Facebook version to cover our bases here so you can see it.

Here’s how it all went down, according to KMPH:

“I saw the big pool of fish, the big bait ball come up out of the water. I saw the whale come up,” McSorley said. “I thought, ‘Oh no! It’s too close.” “The whale was right here in my face, literally,” Cottriel said. “All of a sudden, I lifted up, and I was in the water,” said McSorley, who was recording the whole experience on her cell phone.
“I’m thinking to myself, ‘I’m gonna push. Like, I’m gonna push a whale out of the way! It was the weirdest thought. I’m thinking, ‘I’m dead. I’m dead.’ I thought it was gonna land on me,” Cottriel said. “Next thing I know, I’m under water.” Once McSorley surfaced, she waited for Cottriel to surface, too. Moments later, other paddleboarders and kayakers came to their rescue, making sure they hadn’t been bitten. (via KMPH)

When it was over, they were able to hop into their kayak and make it back to shore with this wild story that was thankfully captured on camera. They almost lost some car keys in the tumble but everything ended up fine.

I’d say the moral of the story here is don’t paddle into a pod of baitfish when there are whales feeding in every direction but frankly, getting *almost* eaten by a whale and surviving sounds like a pretty awesome way to spend a day to me.