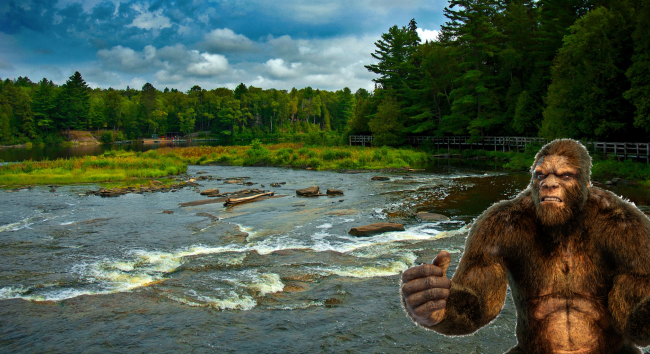 If it seems like ever since the pandemic hit there have been more UFO, Loch Ness Monster and Bigfoot sightings than ever before, that’s because there pretty much have been. Why that is we don’t know for certain, but it may have something to do with people having had more idle time on their hands or just spending more time looking for something to distract their mind.

Regardless of the reason, there has definitely been an uptick in the number of these sightings, especially reports of people encountering what they believe to be Bigfoot. And sometimes not just one Bigfoot, but two, at the same time.

That’s reportedly what happened to a couple of hunters in Michigan, one a bow hunter named Mark, who recently shared their scary Bigfoot story with the Sasquatch Chronicles podcast.

“The thing was huge!” Mark recalled. “I’m talking massive! And it was right next to one of the railroad signs, and the railroad signs were 10 foot and its head probably stood a good half foot over the [sign].”

When his friend shined a flashlight on one of the creatures, he says, “It’s not a bear, because we know what bears look like. He shined it on whatever it was, and the thing just sucked it up like it was a sponge. You could see the silhouette of it, but the hair on this thing just sucked it up. The hand on this thing was f—ing huge. Shaquille O’Neal is a big man, but this thing dwarfed him. It could have palmed a beach ball.

“We could see him really good. He had big legs, big hips, chest kind of tapered up… he had a round head… The arms were very long,” he continued.

“Off to the right of us towards the river, which was south of us, we heard something else making some crazya– noises. That one started coming towards us, and all hell broke loose.

“Something was going down there, fighting, and I mean, it sounded like two T-Rex’s going at it. Branches were snapping, you could hear hollering and growling.

“A couple of seconds later you could hear something running off, and it jumped into the river, then everything got quiet.”

When everything finally calmed down and the Bigfoot creatures had moved on, Mark says, “And we’re still sitting up there shaking and it’s still dark… we sat there for like 15-20 minutes sitting there… Then we had enough nerve to get down to the truck and we got the hell out of there.”

Related: Expert: New Bigfoot Sighting Caught On Video In Idaho ‘Unlikely To Be A Hoax’