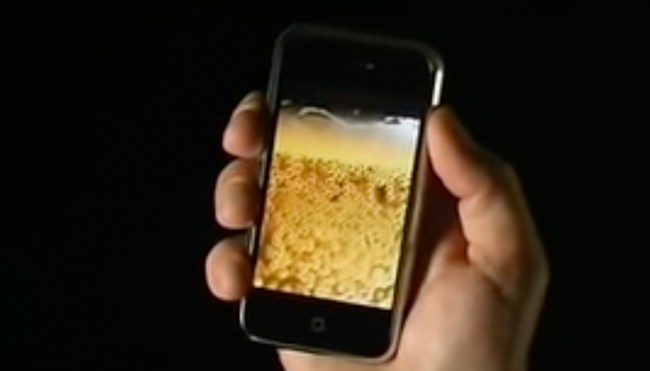 As someone who devoted a good chunk of my middle school years to becoming proficient in T9 and thought being able to play Snake on a clamshell phone was the definition of “cutting-edge” it’s hard to describe just how much my mind was blown when the iPhone made its grand debut in 2007.

The device that led the smartphone vanguard is arguably one of the most revolutionary pieces of technology to ever be released, as it was largely responsible for ushering in a new era of existence where most of us have a powerful computer we can whip out at a moment’s notice tucked in our pocket for the bulk of the day.

The possibilities were virtually endless for early iPhone users who suddenly had access to some fairly unprecedented features, but it also served as a gateway to a number of incredibly basic ways to entertain yourself thanks in no small part to the many novelty apps that took advantage of those various components.

That includes iBeer, an app that anyone under the age of 22 was practically obligated to download if they had an iPhone prior to 2010. The concept was pretty straightforward: you opened the app and it made your screen look like a glass of beer that sloshed with the help of the phone’s accelerometer.

It was a pretty simple idea—but based on what iBeer creator Steve Sheraton shared during an interview with MEL, it was also a very, very lucrative one. Sheraton—who made a living as a magician before getting into the app game—was contacted by Apple after a video of him “drinking beer” from an iPhone went viral and was tapped to become one of the first developers to release a product in the App Store when it launched in 2008.

iBeer soared to the top of the download charts after debuting for $2.99 a pop, and Sheraton says he and his small team of developers “were making $10,000 to $20,000 a day” at the peak of its popularity. However, all good things must come to an end, and Sheraton eventually found himself succumbing to the stress that came with his newfound success and engaged in a $12.5 million lawsuit with Coors after it launched a suspiciously similar app called “iPint.”

However, it seems to have worked out in the end, as Sheraton now resides on a farm and Spain and spends his days helping his fellow magicians develop apps of their own.