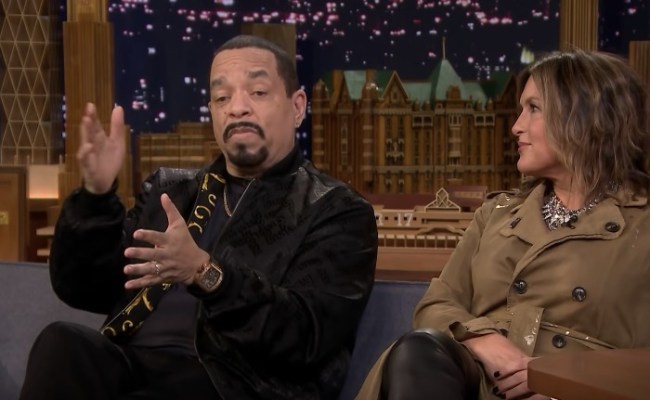 This isn’t really a fun story for anyone but myself, but I once washed my hands at the sink next to Ice-T at the after party of Donald Trump’s Comedy Central Roast. This was years ago, and I was whatever the opposite of sober is that night, but I don’t really recall saying anything to him. We just stood there and washed our hands together like two men observing the rules of not talking in the bathroom. That’s my Ice-T story.

Anyway, a few weeks ago Ice-T went viral on Twitter after he responded to a tweet that he’d never eaten a bagel in his life (or drank coffee). Ice-T, the Original Gangster, was born in Newark, grew up in Los Angeles, but has spent much of his adult life in NYC where he stars on Law & Order: SVU.

I’ve never worked on a TV or film set but I lived in SoHo in downtown Manhattan for half a decade and they shot movies on my block every other week. I got pretty used to walking past the full tables of food for the cast and crew and there was ALWAYS New York foods on there like bagels and lox. Coffee is served at every workplace in America. The fact that Ice-T hasn’t tried either a bagel or coffee (until recently) for his entire life is almost unfathomable for a lot of people.

Ice-T was a guest on The Tonight Show Starring Jimmy Fallon last night where he discussed how he’s come this far in life without eating bagels and he explained himself.

Ice-T did finally try both coffee and a bagel earlier this month after his tweets went viral and he suddenly realized that the entire goddamn world wanted him to try these foods. It was also funny because he’d been seen eating a bagel on SVU when in reality he must’ve been pretending to eat the food. You can watch him try these foods for his very first time if you’re into that:

Now if you’ll excuse me, I’ll be blasting Ice-T’s Body Count at full blast for the rest of the day.