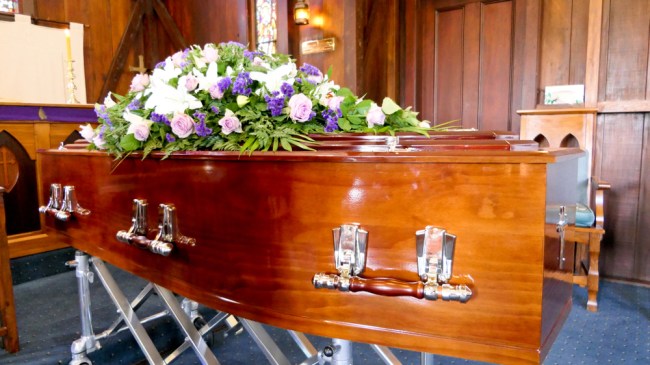 There was once a time when a group of heartbroken Bro’s had to show up to the funeral of their fallen brethren with a cooler of beer iced down in the back of a pickup truck and a flask of whiskey in everyone’s pocket. Although it might sound strange to integrate tailgating with the grieving process, every funeral has a tendency to go a little bit Irish at some point, regardless of religious affiliation. Getting hammered as a living tribute to a deceased friend or family member has been a part of the last dance since the dawn of time. But it has only been without the past few months that death houses have spawned a sudsy solution for bringing the tailgate party inside.

There are now full service bars popping up in funeral homes in some parts of the United States. The $16 billion death trip business, which is reportedly shrinking as more end of life plans include cremation, has been challenged over the past decade to find new ways to generate revenue when the Grim Reaper comes knocking at their door.

And what better way to squeeze a few extra bucks out of the deceased than giving their loved ones the freedom to purchase cocktails and brew on site? It is a business model that one Southern Indiana funeral home has gotten in to — offering beer, wine and spirits (not the haunting kind… at least not until the next morning) to the hundreds of mourners that walk through their doors to say goodbye to old friends, lovers and casual acquaintances.

Scott Funeral Home in Jeffersonville recently obtained a liquor license that allows them to drown the sorrows of all who show up to honor the lives of the dearly departed.

According to a report from the Journal Gazette, putting a full service bar near the lunch meats and funeral pickles was a way to further comfort the families of those on the pale horse to great beyond.

It was actually at the request of customers that the two brothers running the operation, Aaron and Billy Scott, decided to take their embalming services up a notch by offering alcohol as part of the deal. Now, they’re picking the livers of all who step inside. So far, they have served every type of event from simple champagne toasts to full blown drunken bashes.  “Sometimes a traditional funeral just isn’t the way,” said Aaron Scott.

But Scott is not the first Indiana pass-away-parlor to get patrons liquored up while they bid farewell to their dead homies. The brothers actually got the idea from a group of funeral homes in the Indianapolis area that have been slinging hooch to groves of grievers for almost a decade.

Several other funeral groups in the Hoosier State have also incorporated alcoholic beverages into their extinction packages. Some go through local caterers to provide this service, while others have done like the Scott’s and secured a liquor license. It’s not as cheap as a 30-pack of Busch Light, but it does come with some added benefits, like a bartender and liability insurance for the establishment. The Scott brothers say most families start out with a $500 tab.

The trend is gaining momentum in other parts of the country since more families are no longer interested in the dull, drab and depressing organ music and sober silences that they experienced with funeral homes during childhood. A lot of them now want to send their loved ones out with a rip-roaring rager that has attendees screwing each other in the bathrooms and vomiting in the flowers. But at a time of such high emotions, the mix of booze and bereavment always stands the possibility of turning violent. But funeral owners say that knock-down-drag-out brawls often happen without a single drop of alcohol being served. So they’re not too worried about it.