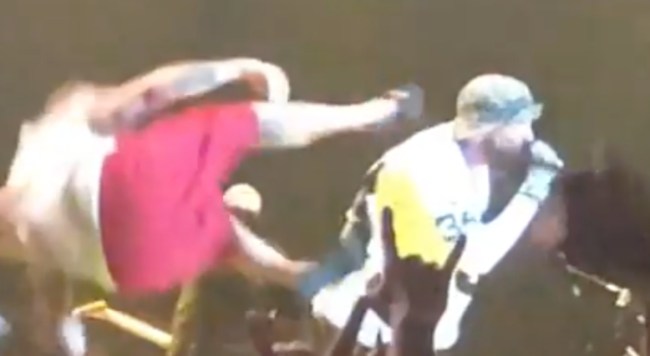 Today in things that nobody saw coming: Insane Clown Posse’s Shaggy 2 Dope tried to dropkick Limp Bizkit’s Fred Durst in the middle of a concert. Emphasis on the word “tried.” It didn’t go according to plan.

Limp Bizkit and the Insane Clown Posse were both performing at the Rock Allegiance festival at the at the BB&T Pavilion in Camden, New Jersey. Smack dab in the middle of the Limp Bizkit concert, a member of the ICP ran on stage and then attempted to do a flying kick but came a few inches short and failed miserably.

The attempted assault arrived while Durst, who was clad in a Bo Jackson jersey and his finest pajama pants, was performing the classic song “Faith.” After the failed Liu Kang kick, security jumped on Shaggy and removed him from the stage. Durst then told the crowd, “What a pussy, he couldn’t even pull it off.” Durst didn’t seem to know that it was ICP’s Shaggy because he told security, “Calm down… It’s just one guy.”

A Reddit user points out that there has been bad blood between Limp Bizkit and ICP actually have bad blood dating back two decades, and it seems like things finally came to a head on Saturday night. ICP had played a set at the festival hours earlier.

“Well it all started 20 years ago when ICP was trying their hardest to sell out. They performed at Woodstock and after was told ‘Fred wants to meet with you’ they had no idea who the fuck Fred was. I guess Fred Durst was a mega superstar and egoed out on them hard like wouldn’t look at them or anything while he talked. He invited them on the Family Values tour with Korn and all those bands then at the last minute told them to fuck off outside and booted them. They were on this huge festival show Monster sponsored together and I’m assuming he was a c*nt again.”