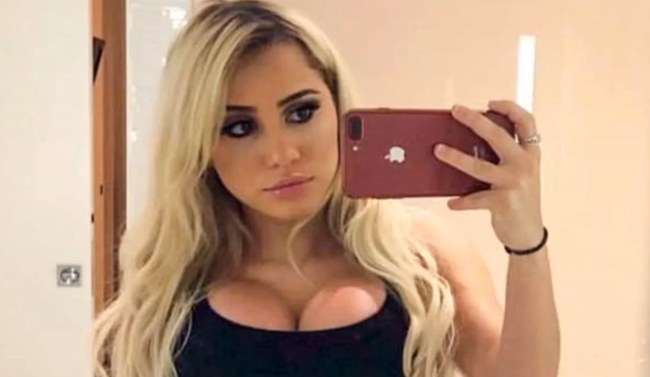 It’s tough out there for Instagram influencers these days. There is the fallout from the Fyre Festival. Plus, how are you supposed to stand out in an ocean full of attention-thirsting social media jezebels who also have excessive almost comical breast and butt implants, promote the same “weight loss” tea, and strike the identical “I’m not looking at the camera but I am looking” modeling pose? According to Marcella Zoia, you make a name for yourself by throwing a chair off the 45th floor of a skyscraper overlooking a busy street and sidewalk.

The woman seen above is Marcella Zoia, a 19-year-old Instagram influencer from Toronto, Canada. Zoia, who has since deleted her Facebook account and Instagram page that had nearly 4,000 followers, has gained the attention she so sorely craved. Unfortunately for Marcella, she also piqued the interest of police after she tossed a chair out of an apartment building because she could have hurt or killed someone with her indefensible actions.

On Saturday, February 9th around 10 a.m., Zoia filmed the video of herself throwing a chair off the balcony of a room on the 45th floor of an apartment building in Toronto with the caption: “Good morning.” The chair smashed onto the sidewalk of an area that is typically busy with tourists and was destroyed. Soon enough the video started getting shared on the internet and went viral.

But it wasn’t just one chair that Marcella tossed off the balcony. “We now know that these two chairs, and some other objects, were tossed from approximately 45 floors above the ground,” said Toronto Police Constable David Hopkinson. “With the high winds that we’ve experienced and where this is, in the middle of a fairly busy tourist spot in Toronto, this could have landed a fair distance from where it was thrown and jeopardized anyone walking underneath.” This is not a good thing to do “for the Gram.”

Chairs no longer on the balcony

Toronto police were looking for Zoia and received tips from the public. “(She had) no regard for anybody that might be passing underneath. I can think of some pretty horrific situations,” Constable Hopkinson said. “People were absolutely outraged. That is likely why we got so much help from the public.”

Under the pressure, Zoia turned herself in on Wednesday morning and made her first court appearance. Zoia is facing charges of mischief-endangering life, mischief to property, and common nuisance. Is there a Snapchat filter that erases jail bars from selfies? The 19-year-old allegedly has a “criminal history,” but details of previous crimes were not provided.

RELATED: 45-Year-Old Man Paddled 200 Times While Pledging For Fraternity, Landed Him In The Hospital And He Called The Cops

Zoia was staying at an AirBnB rental when she tossed the chair and her account on the rental company has been suspended following the incident. “We are outraged by the blatant disregard for community safety on display in the video,” a statement from AirBnB said. “We will be suspending any guest’s accounts that appear to be connected to this incident.”

Marcella Zoia was released on $2,000 bail and will have to live with mother. She did go viral (But also got arrested and could have killed someone) and she’ll be back on Instagram plugging “weight loss” tea within weeks if not days. You know a TV producer is already booking her for some self-destructive reality TV show. If anything she could be a WWE Diva.

RELATED: Man Sips Soup Directly From Ladle In Supermarket, Should He Be Charged With A Hate Crime?