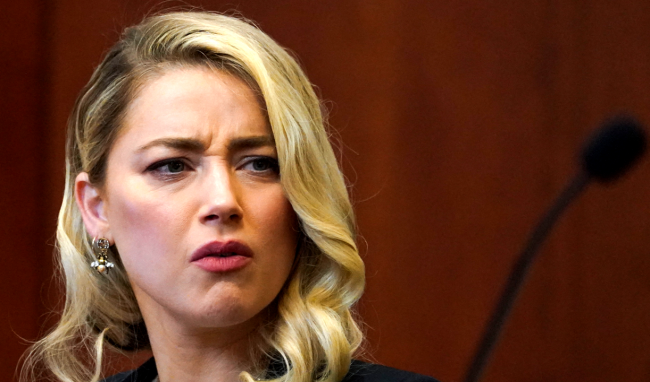 According to media monitoring platform NewsWhip, Americans are currently more interested in talking about the defamation trial between Johnny Depp and Amber Heard on social media than any other topic.

Their data claims that the trial gets an average of 508 social media interactions for each published article over the past month – more than five times that of the war in the Ukraine.

“Hands down it’s a record-setter for us,” Rachel Stockman, president of Law & Crime network, told Axios.

This widespread interest in the trial has even led to some people to spend thousands of dollars and weeks in Virginia just for the chance to get a seat inside the courtroom.

It also, as many legal stories with such high public interest, has led to internet detectives to go to work trying to find conspiracies.

One such amateur sleuth recently posted on Reddit with what they claim is definitive proof that Amber Heard lied about photos that were submitted to evidence in the trial.

The photos, according to Heard, are of her face after allegedly being struck by then husband Johnny Depp.

During Heard’s cross examination, Johnny Depp’s lawyer Camille Vasquez tried to raise doubts about the credibility of the photos by comparing them side by side and asking the actress on what days they were taken.

“Isn’t it true you just edited these photographs?” Vasquez asked Heard at one point.

“Didn’t you just enhance the saturation from one of these photos to make your face look more red?” Vasquez shot back.

“No, that’s incorrect I didn’t touch it,” Heard reiterated.

At that point in the video which was posted to Reddit on Wednesday, the person who shared the video proceeds to demonstrate how the two alleged different photos are, in fact, actually the same photo with the saturation changes, as Depp’s lawyer Vasquez stated in the trial.

Responses to the video were almost unanimous in the belief that the photos are the same.

“Each and every strand of hair is in the exact same place,” one person wrote.

“I would like for this video to be submitted into evidence,” commented another.

“I edit photos, that is 100% saturation manipulation,” claimed another person.

“I don’t edit photos, and that is 100% saturation manipulation,” someone else joked.

“It’s literally the same photo. Not 2 different photos taken one right after the other. It’s the same photo! How could these clowns even accept this as evidence in the first place?” asked someone else.