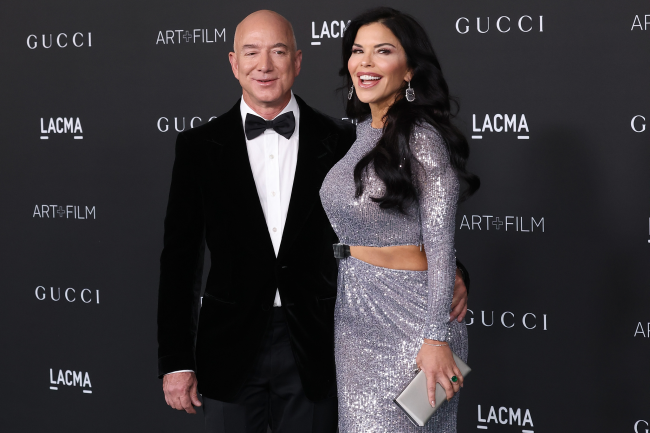 Jeff Bezos and Lauren Sánchez have been linked to one another since news of their alleged affair broke in early 2019. Ever since then, even as the two went through their individual divorces, Sánchez has been referred to as “Bezos’ new girlfriend.”

Regardless of their true relationship history, status or intentions, they often share public displays of affection and frequently attend events as a couple. They are together.

However, if Leonardo DiCaprio were to take a pass at Sánchez, things might be subject to change. Leo, being Leo, enchants every woman in existence and Bezos’ girlfriend does not appear to be the exception.

As celebrities and people of wealth gathered at the LACMA Art + Film Gala over the weekend, DiCaprio, Bezos and Sánchez were among them. A video has since gone viral of the interaction between the trio and it’s hilarious.

While Sánchez appears to give the seven-time Oscar winner some serious googly eyes, Bezos looks down bad.

For starters, DiCaprio is listed online at 6-foot-0 and Bezos at 5-foot-7. The height difference between the two would raise questions about the latter.

From this video, it sure seems like DiCaprio is either three inches taller than believed or the billionaire who designed a phallic spaceship is compensating for something. Hmmmmmm.

Either way, whether Bezos is 6-foot-3, 5-foot-7 or 5-foot-1, he doesn’t appear to stand a chance if DiCaprio ever decides to holler at his girl.

And of course, the internet had a field day. Here are some of the best jokes:

Brother is in Spain💀 pic.twitter.com/vdOcjpR5BH

How it started for Jeff Bezos and how it ended: pic.twitter.com/57EcPeq90N

Find you someone who looks at you the way Jeff Bezos’ girlfriend looks at Leo DiCaprio.

jeff to himself in his
mirror later that same night: pic.twitter.com/YGZh6qbE8P

This is the origin story of Lex Luthor😭

DiCaprio Mind :Chill I am prime member she is not messing up where packages get delivered 🤣🤣🤣🤣💀 pic.twitter.com/QBYg1jM1tq