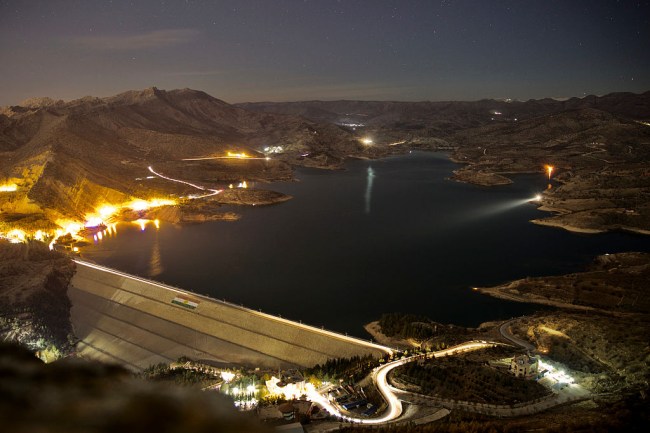 There are swiftly escalating tensions between the United States and Iran, and unfortunately for Iraqis, they are caught in the middle. Shortly after the attack of the U.S. embassy in Baghdad and the drone strike of an Iranian general, people in Iraq spotted strange rod-like lights in the sky, prompting fears of a possible out-of-this-world military operation.

There are unverified reports of unusual lights spotted over Duhok, Iraq.

Just appeared in the sky in Duhok, #Iraq. What is it? pic.twitter.com/BSjaRO5v0N

Image (via @Bilesa_Shaweys) of an unidentified orange streak in the skies above #Duhok.

Video of whatever that thing spotted over Duhok, Iraq pic.twitter.com/MzqBvEKQw1

There were fighter jets flying over Duhok as the same day as the sightings.

For the second day, fighter jets flying over the skies of my hometown, Bardarash in Duhok, 45 kilometers from Mosul. pic.twitter.com/MLbs94b2k6

RELATED: Top Researchers Claim US Military Is Covering Up Their Own Super Advanced Aircraft By Making People Believe It Is A UFO

Duhok is located in northern Iraq, about 40 miles from the border of Turkey, where the U.S. has two airbases: Incirlik Air Base and the Izmir Air Force Base.

In 2008, U.S. military members used night vision to film similar “big vertical streaks” over the sky in Iraq. “I have no idea what the hell they are,” says the soldier on video. They mentioned a “red haze.”

A similar-looking light was seen nearly a year ago in Midland, Texas.

Many conspiracy theorists claimed that the lights were part of a U.S. military directed energy weapons program (D.E.W.). Others speculated that the lights originated from satellites orbiting Earth and may have been a weapon that is involved with President Donald Trump’s new Space Force. The new military branch was signed into law on December 20, 2019, as part of the 2020 National Defense Authorization Act.

Another conspiracy theory was that the lights were from Rods from God or Project Thor. This weapon system could potentially fire 24,000-pound tungsten rods from a satellite in orbit over the planet. The projectiles are not nuclear, but once they hit the Earth, they would penetrate the surface and dig hundreds of feet into the ground. The explosion would be on par with a nuclear weapon, but would skirt the Outer Space Treaty that was signed by 107 countries in 1967 that prohibits nuclear, biological, or chemical weapons from being placed or used from Earth’s orbit.

The tungsten projectile gets its power from the excessive speed at which it travels from orbit to Earth. Plummeting to the Earth gives the telephone-pole sized (20 feet long, one foot in diameter) rods more and more velocity, with the potential of reaching a speed of up to ten times the speed of sound (767 mph). It would take 15 minutes for the Rods from God to go from the satellite to their target on Earth. However, this is extremely doubtful since there has been no reported damage on the ground.

There were also people saying that the lights were part of an alien invasion and lasers being fired from UFOs.

Meanwhile, gamers recognized the red streaks in the sky immediately, saying it was The Hammer of Dawn, which is the satellite-based weapon system in the video game Gears of War.

Since there was no damage on the ground, the most logical explanation is that they are light pillars, an “atmospheric optical phenomenon in which a vertical beam of light appears to extend above and/or below a light source. The effect is created by the reflection of light from tiny ice crystals that are suspended in the atmosphere or that comprise high-altitude clouds.”

They’re light pillars. Relax. Happens when it’s cold and it just so happens to be winter. There’s some fires raging or really bright lights down below where the pillars are.

The reason for the hysteria over lights in the sky is because the entire region is on edge. After the U.S. embassy was attacked by a violent mob, who attempted to breach the walls and burn down the complex, U.S. officials blamed Iran’s Islamic Revolutionary Guard Corps (IRGC) and secretive Quds Force for supporting and orchestrating the attack by facilitating the Iraqi Popular Mobilization Forces (PMF). The U.S. retaliated by killing the Quds Force leader Qasem Soleimani with a drone strike after he had entered Iraq.

Since Soleimani’s death, Iran has promised to hit back with harsh repercussions. President Trump has also guaranteed resounding blowback if American assets or military members are harmed by Iraq or their proxy armies. Let’s hope that all we see is a harmless light show.