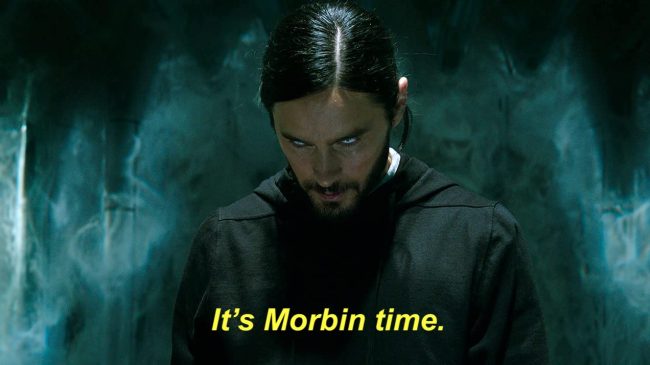 Oh no. Please, god, no. Just when I thought I’d had Jared Leto beaten, the means of my victory — Morbius becoming a historically meme’d movie — might ultimately wind up being the apparatus of my defeat.

While Morbius might only have a 17% on Rotten Tomatoes and a domestic box office gross of $73 million, it can be argued that its cultural impact is as big as any MCU film given the extent to which it’s become a meme. Riddle me this: which character have you seen more of on your social media timelines recently, Doctor Strange or Morbius? If your social media looks anything like mine, the answer is likely Morbius, and therein the problem.

Morbius has become such an omnipresent meme that the phrase “It’s Morbin time” — a line that movie fans have been *pretending* is in the movie — trended on Twitter for a week straight, leading some people to worry that if the culture keeps this up, it may actually convince Sony to greenlight a sequel.

“It’s Morbin time”, a fake quote from the movie Morbius, has been trending on Twitter for a week

'It's Morbin time' has trended on Twitter for a whole week pic.twitter.com/3GGkj9dB0H

PEOPLE. THE ALGORITHM DOES NOT UNDERSTAND IRONY. YOU ARE MANIFESTING MORBIUS 2 INTO EXISTENCE.

THIS is how you sell a Morbillion tickets

My friend has a theory that in the sequel they will lean into the meme and it will have Morbius meeting a plucky sidekick who looks up to him and says something like “you need a catchphrase! How about ‘it’s morbin time’” and he will be like “smh no” but in the end he embraces it https://t.co/rXUbKEZqxt

"Stop making Morbius memes or else Sony will make a Morbius sequel"
Me: pic.twitter.com/bGGzmJgfnw

HE IS NAMED MORBIUS BECAUSE HE CAN MORB AND SAYS "ITS MORBIN TIME" https://t.co/RkrBz2wDKi pic.twitter.com/uzpVEerJ4T

Since ‘Morbius’ is trending everywhere, i wouldn’t be surprised if Sony greenlit a sequel. pic.twitter.com/MzZOKp6KU8

You can’t be mad at Sony when Morbius 2 has him say “ITS MORBIN TIME” if you also clapped when the Spider-Men did the pointing meme on screen🤷🏻‍♂️ https://t.co/nQnrSvBGin

You don’t understand, we WANT a morbius 2 https://t.co/x0VmhxXFVT

Despite the admittedly unprecedented nature in which Morbius has become a meme, it’s hard to imagine Sony truly greenlighting a sequel due to that reason, especially considering that the base of the joke is that both the film and its star are hilariously misguided and misconceived.

RELATED: Someone Has Been Streaming ‘Morbius’ On Twitch For Hours On End, Thousands Of People Are Tuning In And The Comment Section Is Truly Unhinged