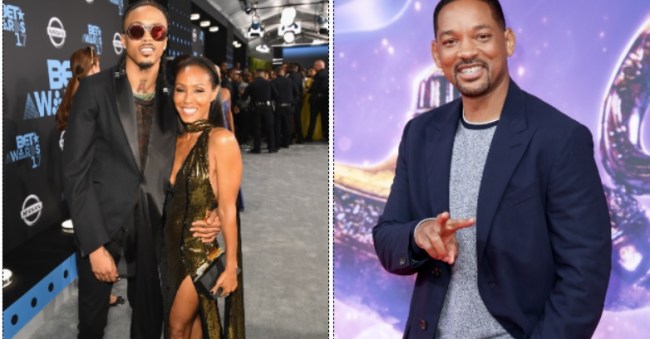 After initially denying it, Jada Pinkett-Smith has admitted to being in a romantic relationship with singer August Alsina.

Last week, during an interview with Angela Yee, Alsina revealed that he had been once romantically involved with Jada and that Will Smith gave him his blessing.

“I actually sat down with Will and had a conversation … He gave me his blessing,” he said. “And I totally gave myself to that relationship for years of my life, and I truly and really, really, deeply loved and have a ton of love for her (Jada). I devoted myself to it. I gave my full self to it. So much so that I can die right now, and be OK knowing that I fully gave myself to somebody … Some people never get that in this lifetime.”

On Friday, Jada and Will went on her Red Table talk show to discuss the matter and she admitted being in a relationship with Alsina while briefly separated from her husband. Jada did shoot down the claim that Will gave them permission to see each other.

There you have it folks Jada Pinkett Smith CONFIRMS that she was in fact in a “relationship” with August Alsina while her and Will were separated.👀 pic.twitter.com/9VoWCKCaXH

Four and a half years ago… I started a friendship with August and we actually became really, really good friends,” she continued. “And it all started with him just needing some help, me wanting to help his health, his mental state.”

“We found all those different resources to help pull him through and from there you and I were going through a very difficult time.”

Smith replied, “I was done with you.”

Will and Jada ended their discussion on a light note when they proclaimed they were going to “ride together, die together, bad marriage for life.”

I AM GOING TO SPEND DAYS TALKING ABOUT JADA AND WILL'S RED TABLE TALK pic.twitter.com/hI2R4tv7YO

Of course, the Internet couldn’t help but react to Jada’s admission.

August Alsina: “I totally gave myself to that relationship for years of my life. I gave my full self to it.”

So basically Jada was supposed to heal August but started humping him instead. Screwed him even more mentally. But don’t know why he’s still hurting…She could’ve kept this #redtabletalk to herself pic.twitter.com/5MBllClTK9

Jada got Will looking like he back in The Pursuit of Happyness pic.twitter.com/4nW8Z4HgmV

I’m watching “Jada Brings Herself to the Red Table Talk” & I cant help but notice that Will looks like he is about to cry right from the jump… #redtabletalk pic.twitter.com/UecMa8zPrK