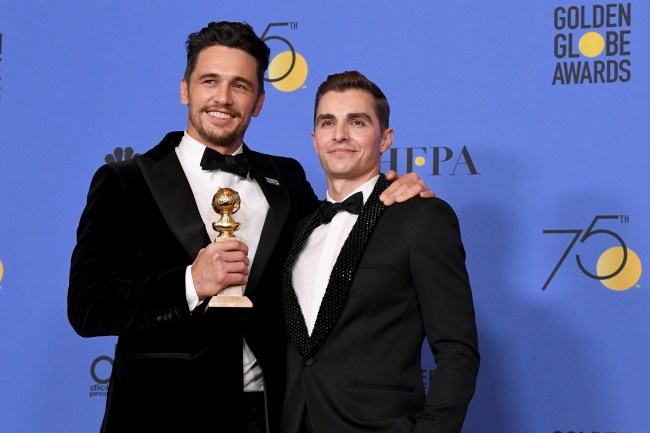 James Franco’s company, Rabbit Bandini Productions, has settled a lawsuit by a former student who said he wrote several early drafts of The Disaster Artist, a biographical comedy-drama that was chosen by the National Board of Review as one of the top ten films of 2017. Franco also won a Golden Globe for Best Actor – Musical or Comedy for his portrayal of actor Tommy Wiseau.

With the ubiquitous praise the movie and its actors received, no shine was given to Ryan Moody. Who’s Ryan Moody? Exactly. He’s the dude who  was allegedly swindled into giving up the rights to his draft of the screenplay for just $5,000.

Moody met Franco as a student in his UCLA film class. Franco reportedly told Moody in 2013 to adapt the book about the making of the cult film The Room, widely considered to be the worst movie ever made. The suit alleged that Moody worked full-time on the script for four months,  delivering five drafts of the screenplay.

According to Variety, Moody claims that Point Grey, a production company helmed by Seth Rogen, wanted to replace him with more experienced writers, so he was bullied into signing away the rights to his work for just a few grand. Moody claims that Franco promised to produce another one of his projects, titled On the Bus, which never saw the light of day. He was also told if he didn’t cooperate that he would never work for Franco and Rogen again. At least Moody was given an associate producer credit on the film for his troubles. SIKE! He was never awarded that, even though the suit alleges he was promised it.

Franco’s attorneys argued that Moody was simply trying to weasel out of a consensual agreement and that he was not bullied into signing the contract. Despite their stance, Franco settled with Moody for an undisclosed amount of money.

I would really like to see how closely Moody’s screenplay resembles the final product before making a judgement call.