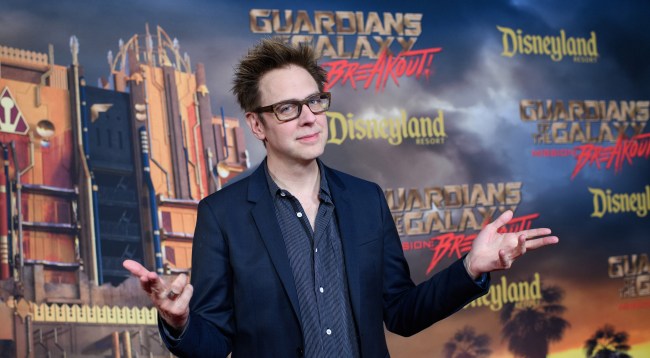 In a move that surprised almost everyone, except those who know anything is possible when it comes to Hollywood and making money, Disney reinstated James Gunn as the writer-director of Guardians of the Galaxy 3.

As you probably recall, Gunn was fired last July by Disney after decade-old tweets of his that joked about pedophilia and rape resurfaced.

Back then, Variety reported…

Gunn’s firing was approved by Disney Studios chief Alan Horn, with his boss, company CEO Bob Iger weighing in on the final decision. The involvement of the highest levels of Disney signals that the cast pressure to rethink the Gunn ouster will struggle to gain internal support. “I don’t see Disney re-hiring him,” says one person close to the matter. “Those tweets were so horrible and Disney has a different standard than other studios.”

Because James Gunn, who recently started working as the writer and director on an all-new relaunched Suicide Squad movie for Marvel’s archrival DC Comics, is back.

On Friday, Gunn confirmed his re-hiring with his first tweet and Instagram post since July of 2018 that read, “I am tremendously grateful to every person out there who has supported me over the past few months,” Gunn wrote on Twitter. “I am always learning and will continue to work at being the best human being I can be. I deeply appreciate Disney’s decision and I am excited to continue making films that investigate the ties of love that bind us all. I have been, and continue to be incredibly humbled by your love and support. From the bottom of my heart, thank you. Love yo you all.”

Prior to being let go by Disney, Gunn had already written a script for the third Guardians of the Galaxy movie which, even prior to his re-hiring, Marvel had confirmed would be used for Volume 3.

Congrats to James Gunn being back on Guardians of the Galaxy- this footage of @DaveBautista’s meeting with Disney was just leaked- pic.twitter.com/Kw034fHBT6

me when I heard that James Gunn is back to Guardains 3: pic.twitter.com/1TyVC9QMdM

Oh, and is ⁦@therealroseanne⁩ back on Roseanne, too? Oh, wait… https://t.co/ujRt9Q3Chf

James Gunn walking into Hall H for the @MarvelStudios panel this year pic.twitter.com/lj5FCyvhAb

funny how brie strives for inclusivity and got absolutely destroyed by all of you for countless weeks and james gunn gets away with everything he’s done without hesitation from anyone.

if you support james gunn unfollow me

brie larson: said that she wanted more diversity, got slammed by the public for doing so