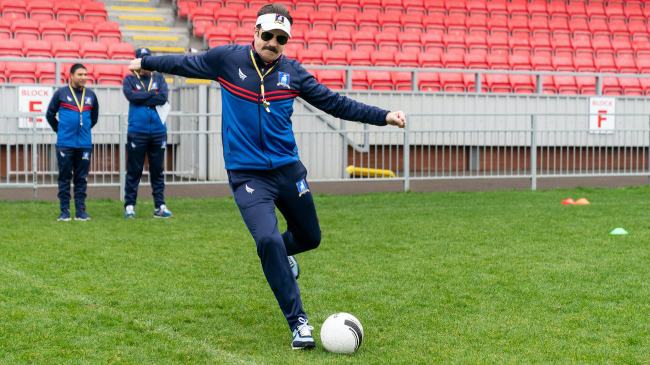 Earlier this year, co-worker Cass and I were having a Slack discussion about how truly athletic the cast of Ted Lasso is or is not.

While certainly far from extensive, there are some soccer-related set-pieces that certainly require, if not a baseline understanding of soccer technique, some semblance of athleticism.

Despite this, though, one of the few oft-criticized aspects of the generally widely beloved series is that it’s soccer scenes can often look as though they’ve been ripped out of the video game. And while that may be vaguely true — take a look at the scene where Roy Kent walks onto the pitch after leaving his TV gig in S2E5 — that doesn’t take away from the fact that the actors performing the “stunts” are actually doing so at quite a high level.

In an effort to show fans the actual effort and talent that the cast is bringing to the pitch, Ted Lasso writer and co-creator Brendan Hunt shared an awesome behind-the-scenes video of Jamie Tartt actor Phil Dunster *actually* hitting that BOMB of a free-kick in the sixth episode of season two, “The Signal.”

Look, as someone who’s played soccer my whole life, it doesn’t matter how many tries it took Dunster: hitting a ball like *that* from *that* distance is flat-out impressive.

And since we’re here, I’ll weigh in a bit on the ongoing conversation around season two’s quality: I don’t think it’s any worse than season one — although I do think it should be focusing more on the team’s effort to get back to the Premier League, as S1 focused on them trying to stay in the league, giving the series a much-needed sports-drama core — I just think people are no longer surprised by it. Season one was such a joy because no one saw it coming. Now that people know what to expect, perhaps its charm doesn’t quite have the same effect.

The seventh episode of Ted Lasso season two will hit AppleTV+ on Friday, September 3. The series has already been renewed for a third season.